Today marks the 100th Anniversary of the birth of cinematographer and director Jack Cardiff.  Cardiff worked with some of the all time greats of cinema, Powell & Pressburger, Hitchcock, John Huston and Orson Wells to name a few.

Of all the films he worked on, one has come to stand head and shoulders above the rest,  Powell & Pressburger's 'A Matter of Life and Death' (or Stairway to Heaven in the US). 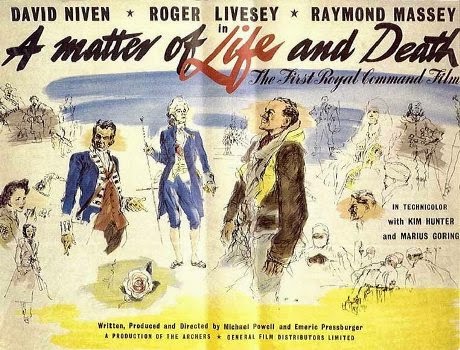 Released in 1946, 'A Matter of Life and Death' tells of a British bomber pilot Peter Carter (David Niven) who unexpectedly survives a jump from his stricken Lancaster Bomber with a damaged parachute and as a result finds himself both in love and on trial, possibly in an 'Other World' (note their avoidance of the word 'Heaven' in contrast to the US title) or possibly in his own damaged mind, fighting for his right to live.

It's a poignant and beautiful film filled with imagination and stunning to look at.  The viewer is left unsure just what the reality of the film is and in awe of the skill and the panache with which it was made.

Email ThisBlogThis!Share to TwitterShare to FacebookShare to Pinterest
Labels: A Matter Of Life And Death, movie