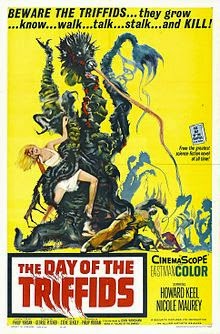 I'm going to be coming back to The Day of the Triffids a few times over the course of this blog, mostly because it's one of my favourites of favourites.  I have a collection of different editions of the novel and read it pretty much once a year and have done so for many years (I'm reading it now).  My love of it didn't start with the book however.  It didn't even begin with the fantastic 1981 BBC adaptation although that certainly cemented it. It began with the flawed but wonderful 1962 movie that bears very little resemblance to the book.

Howard Keel (Seven Brides for Seven Brothers, Dallas) plays Bill Masen, changed here from a British triffid expert into an American seaman,  who, due to surgery on his eyes, misses the meteor shower that blinds most of the rest of the world.  He meets a young schoolgirl - Susan (Janina Faye - who had previously appeared in Hammer's Dracula) and together they travel through France and Spain meeting several other sighted people along the way (including Mervyn Johns', Coker and Nicole Maurey's, Miss Durrant) all the time threatened by the alien plants brought to earth in the meteor shower.  So far so completely different to the plot of the book. 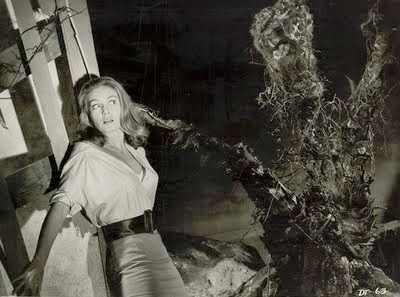 There is a further story running parallel to the adventures of Bill, Susan and Miss Durrant set on a lighthouse where secluded, alcoholic, scientist Tom Goodwin (Kieron Moore) and his wife Karen (Janette Scott) fight a triffid that spits poison and kills.  There's no connection between the lighthouse sequence and the main storyline of the film due to this entire section being written, shot and edited in after the main storyline proved to be too short.  It also provides a (frankly absurd) conclusion to the story as the bickering pair discover the Triffid's secret weakness which will enable the world to fight back and reclaim the planet.

I can't even begin to tell you the number of times I've seen this film.  In the early 90s it became a drunken tradition to watch it on Saturday night after the pubs shut.  It's horribly flawed and with the exception of a couple of names and the walking plants it has almost nothing in common with it's source material but there's something about it I've always loved and probably always will.