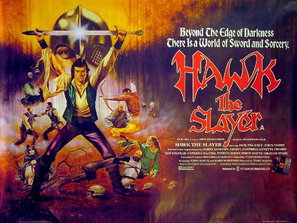 Co-written by novice director Terry Marcel and legendary Hammer composer Harry Robertson (The Oblong Box, The Vampire Lovers, Twins of Evil) and born out of their shared love for sword and sorcery novels, 'Hawk the Slayer' crams every Tolkien and Robert E. Howard trope it can afford - a witch, an elf, a dwarf, a suspiciously ungigantic giant, a magic sword and massed armies of several - into it's £600,000 budget (of which star Jack Palance was reportedly paid a sixth) to create a ridiculously fantastic travesty of a movie that personally I have a bit of a soft spot for. 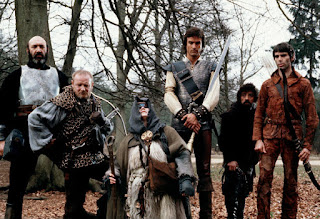 The storyline is essentially a thinly disguised riff on The Magnificent Seven with the six shooters swapped for swords and bows and with the action relocated to a chilly, dry ice drenched park in Buckinghamshire.  Obviously made with an eye to the international market the producers cast two Americans in the leads, the aforementioned Palance and debutant action hero John Terry and they are both, well, they're both pretty terrible.  Of the latter it's perhaps kindest to say that he's ineffectual and wooden and way out of his depth but would mature into roles in 'The Living Daylights', 'Full Metal Jacket' and 'Lost' whilst the former gives a scenery chewing performance of epic awfulness.  Acting around them we have a troupe of reliable Brit supporting actors such as Carry on... staple Bernard Bresslaw (who would return to the fantasy genre again three years later in Krull), One Foot in the Grave's Annette Crosbie, Patricia Quinn (The Rocky Horror Picture Show), Harry Andrews (Theatre of Blood), Patrick Magee (The Skull) and Roy Kinnear (The Bed Sitting Room) all of whom do much of the heavy lifting and keeping admirably straight faces. 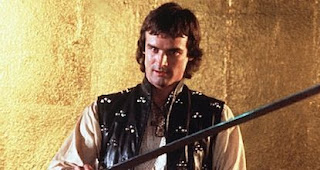 Released at a time when fantasy movies of this sort were extremely thin on the ground and when interest in the fantastical was hitting fever pitch in the wake of Star Wars, Hawk was a box office bomb but one that quickly acquired a devoted fan following and whilst no sequels were ever made (until Garth Ennis' 2022 comic series) it has been credited with triggering the flurry of similar movies that followed in it's wake such as Dragonslayer, Excalibur, Conan the Barbarian, The Beastmaster and the aforementioned Krull to name just a few.

Affiliate links are provided for your convenience and to help mitigate running costs.
Posted by ian holloway at 08:22