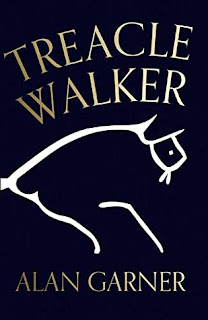 Treacle Walker is a stunning fusion of myth and folklore and an exploration of the fluidity of time, vivid storytelling that brilliantly illuminates an introspective young mind trying to make sense of everything around him.
'Ragbone! Ragbone! Any rags! Pots for rags! Donkey stone!'
Joe looked up from his comic and lifted his eye patch. There was a white pony in the yard. It was harnessed to a cart, a flat cart, with a wooden chest on it. A man was sitting at a front corner of the cart, holding the reins. His face was creased. He wore a long coat and a floppy high-crowned hat, with hair straggling beneath, and a leather bag was slung from his shoulder across his hip.
Joe Coppock squints at the world with his lazy eye. He reads his comics, collects birds' eggs and treasures his marbles, particularly his prized dobbers. When Treacle Walker appears off the Cheshire moor one day - a wanderer, a healer - an unlikely friendship is forged and the young boy is introduced to a world he could never have imagined.

I must admit, and I've no idea why I thought this, but I had kind of assumed that Garner had retired from writing but this little 152 page novella shows him to be a writer still right at the top of his idiosyncratic game.

Treacle Walker tells the story of Joseph (Joe) Coppock and the incidents that coincide with the arrival of the rag 'n' bone man of the title.  Told in a delightful, poetic lilt we find Joe trapped in a fairy tale adventure as a folkloric cavalcade of fantastic phenomena both vex and aid him as he tries to quietly reads his comic.

I've never been the biggest of Garner fans having missed the opportunity to read him as a kid I found his books a tad frustrating as an adult but here we have what must surely go down as one of his definitive works.  Despite Garner's predominant reputation as a writer of intelligent fantasies for younger readers this is very much aimed at a mature reader and is in many ways a love letter to Garners own youth of marbles and comics, steam trains, rag 'n' bone men and playing amongst the ghosts and legends of a perpetually haunted country.  It's a darkly funny tale of another world, a mythic world filled with old lore, a world of deep, dark woods and the mischievous creatures that live within them, a world of magic and imagination leaking through into our own that draws from all the tales that transported and terrified us as kids and it's utterly wonderful.

Affiliate links are provided for your convenience and to help mitigate running costs.
Posted by ian holloway at 15:41