Room for an Inward Light 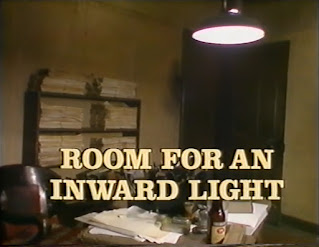 'Leap in the Dark' was a long running BBC2 series that ran from 1973 to 1980 which over it's 4 series morphed from documentaries to dramas all with a supernatural theme.  'Room for an Inward Light' was the penultimate episode of the 4th series from which we've featured several episodes before - Alan Garner's 'To Kill A King', David Rudkin's 'The Living Grave' and Russell Hoban's 'Come and Find Me' - and was written by the playwright / novelist David Pownall.

Here we find struggling novelist Thomas Myers (Brian Blessed) contacts critic Bernard Charlton (Christopher Strauli) for help after reading an article he'd written about how there were great authors working away in anonymity.  Realising that the cranky, eccentric and prolific Myers is exactly the type of undiscovered genius he'd been searching for Charlton takes on the role of agent and begins his quest to find him a publisher. 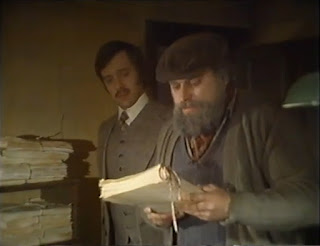 The cast of three - the two men are joined by 'Carry On' actress Carol Hawkins in the third act - are pretty solid with Strauli playing the slightly bemused critic very well and Blessed for whom subtlety is never the most obvious attribute actually displaying some here amidst the characteristic bluster.  Pownall's script is significantly more straightforward than those others mentioned above but certainly surprised when it didn't go in the time-worn direction I was half expecting but I was left with the feeling that the entire script was written in order to crowbar in one particular pun.  The end result though I have to say isn't wonderful but it is certainly watchable.

Affiliate links are provided for your convenience and to help mitigate running costs.
Posted by ian holloway at 12:47

Email ThisBlogThis!Share to TwitterShare to FacebookShare to Pinterest
Labels: Leap in the Dark, Room for an Inward Light, TV Series