Come and Find Me 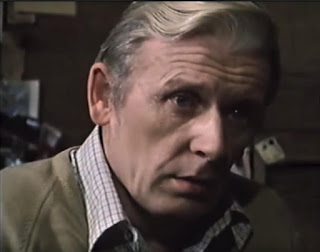 'Leap in the Dark' was a supernatural BBC series shown in the late 70s into 1980.  Over it's 4 seasons it morphed from documentaries to docudramas to, in it's 4th season, pure drama.  This episode is taken from that final season which included episodes written by Alan Garner, Fay Weldon, David Rudkin and, in this instance, Russell Hoban who is perhaps best known around these parts as the author of the post-apocalypse novel 'Riddley Walker'.

Hoban's story gives a writer, Quilling (Alan Dobie - also to be seen in the 1987 adaptation of Robert Aickman's 'The Hospice'), a comission from the producer of a series called, funnily enough 'A Leap in the Dark', to write about a supernatural experience of his own or one from their files., We're never sure which he chooses but presumably it's the latter as he's soon seen chatting with a widowed woman, Mrs Anders (Penelope Lee), haunted by her husband who talks about how it's the very bricks and clay of the house that holds the ghosts.  In line with this idea for Quilling a ghost is "It's what's left behind when you go away and you haven't the strength to take all of yourself with you." But it's left ambiguous here whether that 'leaving' is entirely connected to death as the widow seems as much haunted by the absence of her ... possibly ... still living daughter as she was by the husband and is by the spirits of the young girl and the roundhead soldier that she sees potentially with the aid of spirits of a differnent kind.

With it's very intrusive music, Hoban's purple prose and it's disjointed time hopping narrative 'Come and Find Me' makes for a bit of a frustrating watch and I was glad of it's concise run time but with it's echoes of Nigel Kneale's masterful 'The Stone Tape' and an effectively creepy atmosphere - brought on, at east in part, by the poor quality of the copy - makes it an intriguing one too.

Affiliate links are provided for your convenience and to help mitigate running costs.
Posted by ian holloway at 12:31

Email ThisBlogThis!Share to TwitterShare to FacebookShare to Pinterest
Labels: Come and Find Me, ghosts, Leap in the Dark, TV Series