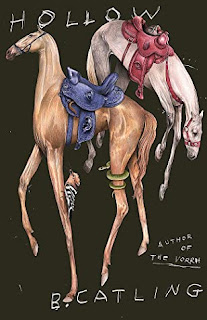 Brian Catling
CoronetFrom the acclaimed author of the Vorrh Trilogy comes an epic odyssey following a group of mercenaries hired to escort a divine oracle on a long journey amidst a war between the living and the dead.

Taking it's cue from the paintings of Hieronymous Bosch and Pieter Bruegel the Elder Brian Catling's new novel following the completion of his Vorrh trilogy journeys across a Europe that is riven by religious turmoil into a land beset by fantastical 'Woebegots' and the forces of the Inquistion.

Barry Follett and his band of mercenaries are tasked with transporting a new oracle to the Das Kagel monastery in whose boundaries the battle depicted in Bruegel's 'The Triumph of Death' is being fought for all time and within whose walls the oracle must be confined.

The oracle is a distorted creature lost in it's own world as are Follett's men, several of whom are distinctly not of that time or place and the world itself feels trapped in a hellish descent that can only be curtailed by the arrival of the oracle at the monastery.

Here Catling has once again created a fascinating and expansive premise which he has, to a point, fashioned into an enjoyable read but in line with it's title 'Hollow' is a little empty.  In it's telling it feels more like a series of vignettes revolving around a vague core idea which I must admit was how I felt about the first Vorrh book too.  As such I came away from it having enjoyed the ride but also wondering about all the dangling threads that were left behind and a wish that Catling had spent a little more time interlacing, developing and, at least occasionally, resolving a few of them.

Affiliate links are provided for your convenience and to help mitigate running costs.
Posted by ian holloway at 19:09