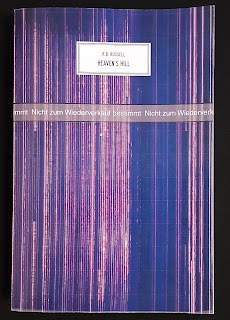 Ruth and Oliver grew up next door to each other on Heaven's Hill where, with the help of Oliver's invalid mother, they used to play a game of her invention called 'International Travel' that cast the pair as globe trotting adventurers.  Actual adulthood brought a more mundane reality as Ruth became a teacher and Oliver went off to work for - whisper it - GCHQ with an interest in number stations. Mundane that is until Ruth receives a visit from MI5 and learns that Oliver has gone missing following the receipt of some oddly specific messages that, impossibly, bear a striking resemblance to their childhood game.

What follows is a rollicking mash-up of all your favourite ITC shows such as 'The Champions', 'Jason King' and 'The Prisoner' alongside 'The Avengers' and a very healthy serving of 'Sapphire and Steel' through which Russell launches his characters on a mind bending journey through time that allows them to reinvent themselves as uber cool & hip super spies as they trace the source of the enigmatic messages.

Lots of the comfortable old tropes are present and correct as Ruth and Oliver - at least in one reality - gallivant across countries in a sport car, display a fantastic array of remarkable skills, evade Russian and Chinese spies, come to the aid of a blackmailed air hostess and there's even mention of a dastardly criminal mastermind although, and I have mentioned this to Ray, I can't help but feel that he missed a trick by not including a criminal organisation with an unlikely acronym for a name in there somewhere.

Don't be fooled though this is no mere pastiche but a love letter to a genre now pretty much consigned to history (and blogs like this one) but one written with an awareness of both it's absurdities and it's joie de vivre as the mundane, workaday Ruth, with her never ending piles of marking and lesson planning, and Oliver, with his slovenly lifestyle, not forgetting the grimy, black bag era spying of the MI5 agents is contrasted beautifully with the day glo adventuring of the 'International Travel' Ruth and Oliver.

It's hugely good fun and, if like me (and Ray), you grew up intoxicated by the likes of Pertwee, Rigg, McGoohan and McCallum then 'Heaven's Hill' is going to transport you back to that spy-fi heyday of the late 60s and early 70s and leave you yearning for a cravat or cat suit of your very own as you drink martinis for breakfast whilst lighting your imported Turkish cigarettes with the laser lock pick hidden in the heel of your patent leather shoes.

Affiliate links are provided for your convenience and to help mitigate running costs.
Posted by ian holloway at 10:57