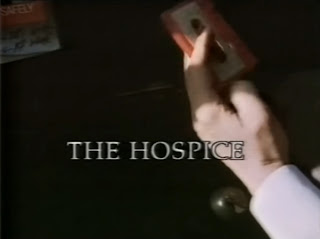 Robert Aickman was an English writer of  'strange stories' (his term) of which he wrote some 48 that have been collected and reissued most recently by Tartarus Press and Faber & Faber.

Taken from the collection 'Cold Hand In Mine', 'The Hospice' is a deeply unsettling tale of a man stumbling into a situation that he cannot understand when lack of petrol and an inexplicable animal attack lead him to seek refuge in a remote building offering "Good food, some accommodation".

Screened as part of an obscure, late eighties HTV West anthology series called 'Night Voices', The Hospice is a bold and I think mostly successful attempt to film one of Aickman's more inscrutable stories.  The director, Dominique Othenin-Girard (who went on to make Halloween 5 and Omen IV) makes some clunky decisions (the moving statue @1:15) but he creates an uneasy atmosphere characterised by the gurgling radiators of the overheated building, the amorphous creaks and squelches reminiscent of the digesting of the massive portions of food served at dinner and the discordant musical score alternating between ethereal voices and avant garde jazz stabs.  The enigmatic nature of Aickman's story is maintained but in the more blatant world of film and stripped of the elegant obfuscation of the author's prose we are given a far more blatant indication of intent and meaning than in the original.  In the lead role Jack Shepherd (now far more widely known as Wycliffe) is excellent as Maybury as are Alan Dobie (as Hospice maitre d, Falkner) and Jonathan Cecil (as his unexpected room mate, Mr. Bannard) but Marthe Keller is given little to do as Cecille.

This is a story that resides more fully in the weird than in the supernatural it sits more easily alongside Kafka, The Twilight Zone or the works of David Lynch than it does M.R. James or Algernon Blackwood.  It is a phantasmagoric fever dream that drags you into a world both seductive and unpleasant with little justification offered or resolution provided.

If you enjoy what we do here on Wyrd Britain and would like to help us continue then we would very much welcome a donation towards keeping the blog going - paypal.me/wyrdbritain
Posted by ian holloway at 16:56