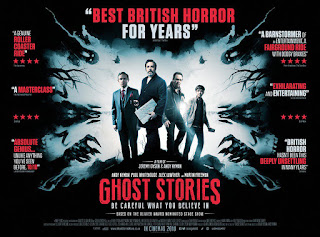 I've got to admit I wasn't hugely taken by Jeremy Dyson's book of ghostly tales 'The Haunted Book' when I read (some of) it a few years back.  I'm not going to knock it because what I read wasn't bad and he has an obvious love for the genre but the first few stories just didn't really grab me, my interest wandered and I never finished it.  I dislike not finishing a book especially in such a rude and dismissive manner so may have to go back and have another try especially in light of this new trailer for the upcoming 'Ghost Stories' movie written by him
and Andy Nyman.

Adapted from their play of the same name 'Ghost Stories' tells the story of...

'Phillip Goodman, professor of psychology, arch-sceptic, the one-man ‘belief buster’ – has his rationality tested to the hilt when he receives a letter apparently from beyond the grave. His mentor Charles Cameron, the ‘original’ TV parapsychologist went missing fifteen years before, presumed dead and yet now he writes to Goodman saying that the pair must meet. Cameron, it seems, is still very much alive. And he needs Goodman to find a rational explanation for three stories that have shaken Cameron to his core. As Goodman investigates, he meets three haunted people, each with a tale more frightening, uncanny and inexplicable than the last.'

Now I know you can rarely judge a film by it's trailer - we've all seen amazing trailers for appalling movies and vice versa - but this one has got me really hopeful for something nicely creepy.

'Ghost Stories is a barnstormer of an entertainment, a fairground ride with dodgy brakes. It’s an anthology of creepy supernatural tales in the intensely English tradition of Amicus portmanteau movies from the 1960s, such as Dr Terror’s House of Horrors, or the Ealing classic Dead of Night.'

- which I must admit has me quite excited for the April release date.

If you enjoy what we do here on Wyrd Britain and would like to help us continue then we would very much welcome a donation towards keeping the blog going - paypal.me/wyrdbritain
Posted by ian holloway at 01:58