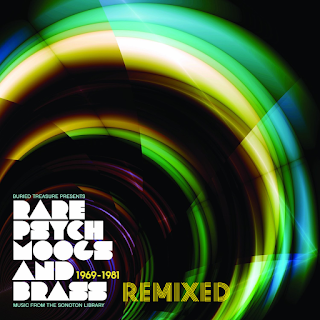 Over the past few years Wyrd Britain's good friend Alan Gubby has been responsible for unearthing and releasing some stunning artefacts from the BBC Radiophonic Workshop archives both in conjunction with Jonny Trunk over at Trunk Records (Alan was instrumental in their two John Baker releases and the more recent Delia Derbyshire 'Circle of Light') and on his own Buried Treasure label where he's released another John Baker collection - the astonishing 'Vendetta Tapes' - and various other neglected gems such as electronic music pioneer Alan Sutcliffe's EMS Synthi explorations.

One of the first things we bought from Buried Treasure was another of their archive digs of electronic music of a slightly different form in the shape of 'Rare Psych, Moogs & Brass' a collection of undeniably funky and downright groovy 'big band grooves, moog synths, psychedelic funk, dub disco & more produced between 1969 & 1981' collected from the Sonoton Music Library.  We're suckers for library music here at Wyrd Britain and this collection of rarities became a fast favourite.

Now we are very pleased to tell you that Buried Treasure has released a companion volume to that album of remixes featuring tunes by the amazing folktronic ensemble Revbjelde, Jung Collective, Zyklus, Monoslapper, Buff Plaza & the frankly gloriously named Jazz Spanky (most - if not all - of which involve Alan in some form or other).  Just like it's parent volume this set is a toe tapping, bum wiggling, head noodling assemblage of tumescent delights that twist and turn the originals into various flavoured cocktails of sleazy, loungey, dancey, acidy, groovy, psychy gold.

If that's got your tastebuds tingling then hit the player below to have a listen or click through to the bandcamp page where you can download the remixes for a paltry £3 or the original CD with the remixes download thrown in for the bargain price of £8 - be quick though at the time of writing there were only 6 left.

If you enjoy what we do here on Wyrd Britain and would like to help us continue then we would very much welcome a donation towards keeping the blog going - paypal.me/wyrdbritain
Posted by ian holloway at 21:07