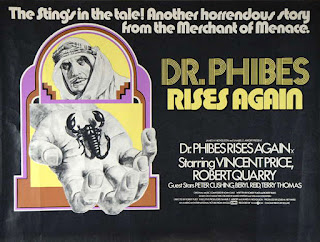 Even though he failed in his revenge on the men he blamed for the death of his beloved wife Victoria (Caroline Munro) a newly resurrected Dr. Phibes (Vincent Price) gathers up her immaculately preserved corpse, his mechanical musicians and his glamorous assistant Vulnavia (Valli Kemp) - who has somehow survived having her head dissolved in the previous film although she does look different as  Virginia North was unable to reprise her role due to pregnancy - and heads off to Egypt on a quest for resurrection for his wife and eternal life for them both.

Ranged against him are Inspector Trout (Peter Jeffrey) and Superintendent Waverley ((John Cater) - both returning in their roles from the previous film - and his rival in the search for immortality Darius Biederbeck (Robert Quarry).  In his customary elaborate manner Phibes contrives to murder his way through Biederbeck's team in search of his goal. 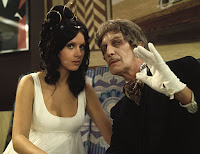 With cameos from Peter Cushing, Terry-Thomas, Beryl Reid and John Thaw this sequel is a same but different sort of beast as it's predecessor, it's every bit as elaborately bloodthirsty but played more for laughs, for instance one character (Baker played by Lewis Fiander) is shown reading Henry James' 'The Turn of the Screw' before being crushed to death in a giant screw press.  Price is of course his usual wonderfully melodramatic self but Kemp is a poor replacement as Vulnavia as she lacks the poise and simmering sensuousness of North.

It's an entertaining sequel that tries valiantly to live up to the idiosyncratic original but the over-reliance on comedy, the police double act of Trout and Waverley in particular,  bogs the film down and hampers the story a tad but that said it is still a film unlike most others and a camp monstrosity of divine proportions in it's own right.

If you enjoy what we do here on Wyrd Britain and would like to help us continue then we would very much welcome a donation towards keeping the blog going - paypal.me/wyrdbritain
Posted by ian holloway at 15:06