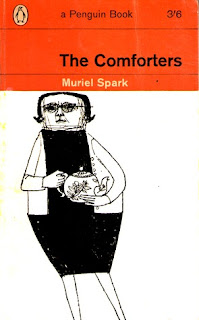 Caroline Rose is plagued by the tapping of typewriter keys and the strange, detached narration of her every thought and action. Caroline has an unusual problem - she realises she is in a novel. Her fellow characters also seem deluded: Laurence, her former lover, finds diamonds in a loaf of bread - has his elderly grandmother hidden them there? And Baron Stock, her bookseller friend, believes he is on the trail of England's leading Satanist.

I bought this as part of a batch of vintage Penguins to sell in the Wyrd Britain shop but having checked out it's blurb on Goodreads I just had to read it and I'm really rather pleased I did.

Sparks' first novel, originally published in 1957, is the story of the various groups of people that orbit the fantastically devious Louisa Jepp.  These groups include Caroline Rose newly Catholic and hearing the sounds of a typewriter and a voice narrating her every thought and action, Caroline's on / off fiance and Louisa's grandson Laurence who's investigating why his grandmother is hiding diamonds in the bread, Baron Stock, a bookseller with an overpowering interest in the occult and Georgina Hogg an unpleasant, bore of a woman who "suffers from chronic righteousness."

Spark's novel is a charming, witty and idiosyncratic romp with a cast of fairly loveable eccentrics.  It toys with the strange and supernatural throughout mostly in the form of Caroline's narrator and the Baron's quest to unmask England's premier Satanist but it's one true moment is as explicit as it is fleeting and provides a discomforting premonition of a somewwhat dark turn at the novel's end.

I've always been very much a whim reader generally chosing my next read on the spur of the moment and in truth there's nothing about that ^ awful cover art on the edition I read that would entice me but a good blurb was the catalyst for triggering this whim which paid unexpected dividends providing an object lesson in not judging a book by it's cover as it turned out to be ridiculously good fun.

Affiliate links are provided for your convenience and to help mitigate running costs.
Posted by ian holloway at 19:04