The Irregular Casebook of Sherlock Holmes 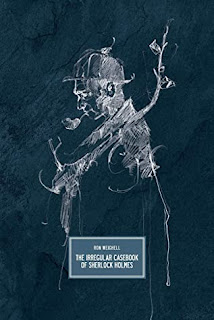 Sherlock Holmes, wrote his friend and chronicler John H. Watson, was an 'unofficial adviser and helper to everybody who is absolutely puzzled', and as such Holmes came into contact with 'all that is strange and bizarre'. Cases such as THE HOUND OF THE BASKERVILLES or 'The Sussex Vampire' show the great detective dealing with matters which certainly are strange and bizarre; yet in all the sixty cases in the Sherlockian canon, Holmes proves that the supernatural plays no part in the matter under investigation.
What if, however, those sixty cases did not tell the entire story? In THE IRREGULAR CASEBOOK OF SHERLOCK HOLMES, we encounter five cases which test Holmes's powers to the limit; strange and bizarre cases involving forces that are not of this world. Missing manuscripts, strange sects, sudden death, and mysterious encounters all lead Holmes and Watson into a twilight world of mystery, magic, and danger, where nothing is commonplace and people are not what they seem.

Over the last few years I've had the real pleasure of reading a few of Ron Weighell's stories but this is the first time I've gotten to read his stories 'en-masse' and I'm hugely impressed.

Here Weighell embraces his love of the deerstalker detective and merges him with his love for supernatural fiction.  In Weighell's hands we find Holmes and Watson in the company of M.R. James investigating a mystery linked to Dr John Dee and with Arthur Machen investigating a cult entangled with the Holy Grail.  We also find him clambouring across rooftops in pursuit of a werewolf, in Egypt hunting a sorceror and swashbuckling on the canals of Venice.

I'm no Holmes devotee but I do enjoy the stories and I'm always open to a new one but personally I find the arch rationalist Holmes to be a poor fit with supernatural stories and the ones that I've read such as those in the 'Shadows Over Baker Street' anthology have mostly disappointed but Weighell has a delicate touch and the weird is kept to a subtle distance with enough ambuiguity for Holmes' world view to remain mostly intact and for this to be a very enjoyable collection indeed.

NOTE - due to quality issues Zagava have withdrawn their POD range but I think books as good as the ones they release deserve to be celebrated so I'll be reviewing a few of the ones I have here over the coming weeks. In this instance there is a digital edition available at the link below.

Affiliate links are provided for your convenience and to help mitigate running costs.
Posted by ian holloway at 19:09