The Animals Praise the Antichrist 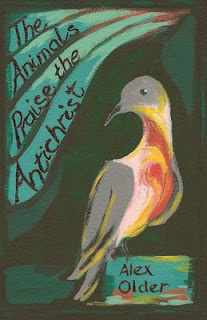 It's time to write it all down. I don't know how much longer I'm going to stay. I'm writing it for me and I'm writing it for you, even though you'll probably never see it. I'm talking to you, Christa, and to no one else.
Filled with yearning for lost love, writing against the backdrop of a world in chaos, Alex records an intimate account of his time with Christa, his half-Swedish girlfriend, who disappeared seven years earlier in opaque circumstances.

I was first alerted to this book via David Tibet (of Current 93) enthusing about it on his Instagram page after which Alex very kindly sent me a copy for review and I'm so very glad he did.

With it's roots in the stories of the likes of, in particular, Alan Garner and also in the work of folks such as M. John Harrison and Joel Lane and in the post punk politics of the late 1980s Older has constructed a poignant, supernatural love story of the doomed (not a spoiler) romance between two outsider teens both from neglectful homes who find common ground in their shared love of music and their animosity towards the casual cruelties of the world around them.

As the two - Alex and Christa - meet and develop their relationship and as their mutual alienation from their peers and their families deepen other forces are gathering in their town, grey clad figures with a seemingly intense interest in the two, and in Christa especially, move into the area en masse and the inevitable crossed path becomes a revelatory experience for the couple.

Older takes a refreshingly sedate approach allowing the pair's romance time to establish and develop before its eventual severing (still not a spoiler) and the cataclysmic events that surround it.  The peripheral characters are lightly sketched with just enough detail to intrigue and their motivations, actions and the events they instigate remain as enigmatic as they are catastrophic.

It's a remarkably mature first novel that wears it's influences, or perhaps I should say heritage, on it's sleeve and incorporates it's more unusual elements into the mundane with very satisfying subtlety in what is a spellbinding read.

Affiliate links are provided for your convenience and to help mitigate running costs.
Posted by ian holloway at 10:13