City Under the Sea 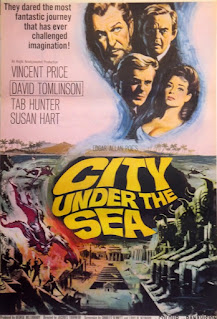 Lo! Death has reared himself a throne
In a strange city lying alone
Far down within the dim West,
Where the good and the bad and the worst and the best
Have gone to their eternal rest.
Resignedly beneath the sky
The melancholy waters lie.
But lo, a stir is in the air!
The wave, there is a movement there!
As if their tops given death
His undivided time.

Known in the US as 'War-Gods of the Deep', 'City Under the Sea' is a Vincent Price helmed movie from American International Pictures home of Price's Phibes movies as well as Roger Corman's Edgar Allan Poe movies to which this owes much of it's genesis, parts of it's title and flashes of it's script including that opening quote above which paraphrases Poe's poem, 'The City in the Sea' and was one of a number of movies produced by the studio that was lumbered with a Poe related title - see also 'The Conqueror Worm' the entirely irrelevant US title of 'The Witchfinder General'.

Tab Hunter plays mining engineer Ben Harris who along with (Mary Poppins' David Tomlinson) Harold Tufnell-Jones FRA (Fellow of the Rooster Association) is plunged into the submerged city of Lyonesse in pursuit of landlord's daughter Jill Tregillis (Susan Hart).  There they meet Sir Hugh (Vincent Price) and his band of  smugglers who along with their subservient 'gill men'  have been hiding in the sunken city kept alive by the rejuvenating gases of the increasingly active volcano upon which the city is built. 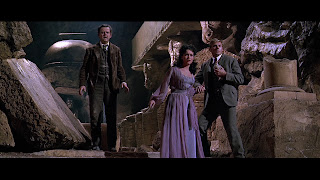 It's an engaging enough romp and there's a decidedly low budget feel to the movie that rarely ventures beyond the confines of the studio. Price is uncharacteristically subdued here leaving much of the scenery unchewed whilst John Le Mesurier cuts a delicately sympathetic figure as the Rev Jonathan Ives. Hunter in his first starring role makes for a clumsy lead as does Hart but Tomlinson is well within his comfort zone as the buffoonish Tufnell-Jones.  The movie makes a valiant attempt at replicating the appeal of Jules Verne stories such as '20,000 Leagues Under the Sea' but ultimately falls far short thanks to a lacklustre script and some uninspired direction from Jacques Tournier, here making his last film after a career that included such highlights as 'Cat People' and 'Night of the Demon'.

Affiliate links are provided for your convenience and to help mitigate running costs.
Posted by ian holloway at 08:39