The Trials of Koli: Rampart Trilogy 2 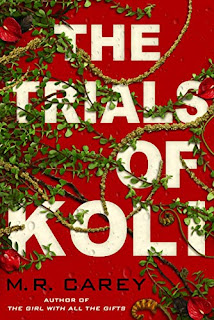 The Trials of Koli is the second novel in M R. Carey’s breathtakingly original Rampart trilogy, set in a strange and deadly world of our own making.
Beyond the walls of Koli’s small village lies a fearsome landscape filled with choker trees, vicious beasts and shunned men. As an exile, Koli’s been forced to journey out into this mysterious, hostile world. But he heard a story, once. A story about lost London, and the mysterious tech of the Old Times that may still be there. If Koli can find it, there may still be a way for him to redeem himself – by saving what’s left of humankind.

I loved the first book of this new trilogy from Mike Carey and had high hopes for this second one that were well met.

Set in a post-apocalyptic 'Ingland' where the population is greatly reduced following 'The Unfinished War' and live in increasingly isolated villages in a country covered in genetically modified plants and animals all of which have a hankering for fleshy, tasty humans.

Thrown out of his village in the first book for purloining some very rare tech - a (subsequently sentient) music player - from the vaults of the controlling family, Koli falls in with a travelling medic and a young girl who'd previously been part of an apocalyptic death cult.

Book 2 continues their travels towards London and we get to meet more of the denizens of the world in the form of the army of the powerful village of Half-Ax and the gentle fisher folk of the lagoon.  We also get to see what was happening back in Koli's former home as Carey flips the narrative over to tell Spinner's story as Koli's childhood friend also finds herself at odds with that self same controlling family and the soldiers of Half-Ax.

What we have is verty much the middle book in a trilogy that tells a solid and enjoyable road story in the same warm, affectionate and engaging style of the first that drops in just enough hints of what's to come to whet the appetite for the series finale.

Affiliate links are provided for your convenience and to help mitigate running costs.
Posted by ian holloway at 15:45