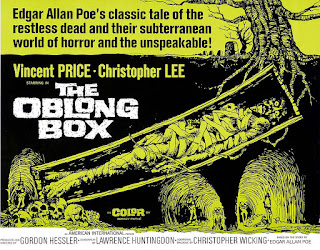 Vincent Price stars in what is purported to be an adaptation of an Edgar Allan Poe story but in actuality beyond the title bears little (by which I mean no) resemblance to the source material which is a rather gentle and bittersweet tale of a sea voyage and a man with a large oblong box that he keeps hidden in his cabin.

In this version Sir Edward Markham (Alister Williamson) is kept locked away from the world by his brother Julian (Price) after being horribly disfigured and driven to madness in an African voodoo ceremony.  Faking his own death in order to escape and finding himself in the hands of the resurrectionist Dr Newhartt (a spectacularly bewigged Christopher Lee) he embarks on a campaign of revenge against his brother. 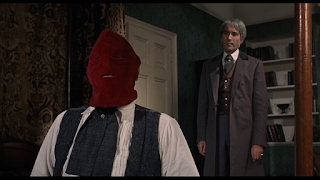 'The Oblong Box' was originally intended to be the next project for director Michael Reeves following 'Witchfinder General' and featuring the return of three cast members (Price, Rupert Davies & Hilary Dwyer) but unforunately he had to leave the film due to illness, dying soon after, and the directors chair was taken over by Gordon Hessler who'd subsequently make 'Scream and Scream Again' (also with Price and Lee) but who would 8 years later bear the blame for the travesty that was 'Kiss Meets the Phantom of the Park'. 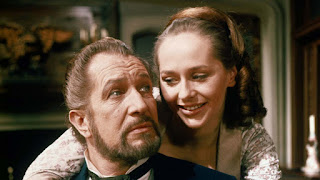 Now, I love watching him gnaw on the scenery but Price is unusually reserved here - and all the better for it - with both him and Lee taking a backseat to the masked (and dubbed) Williamson as his rampages bring him closer to the truth of his disfiguration.  It's a slightly hodge-podgey sort of affair due, I suspect, in no small part to its troubled beginnings and the script-tweaking it was apparently given but there's a strong ensemble cast and its low-key nature and slowly unfurling plot makes for an enjoyable and absorbing experience.

If you enjoy what we do here on Wyrd Britain and would like to help us continue then we would very much welcome a donation towards keeping the blog going - paypal.me/wyrdbritain
Affiliate links are provided for your convenience and to help mitigate running costs.
Posted by ian holloway at 12:02