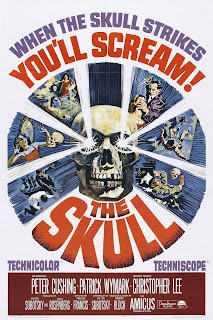 Made in 1965 by the Amicus studio 'The Skull' is another pairing of the Peter Cushing / Christopher Lee dream team.  This time out they play collectors of the arcane, Cushing's Dr Christopher Maitland because he writes about it and Lee's Sir Matthew Phillips as a lover of such objects.  They source their various macabre mementos at auctions where we first meet the three stars and from dodgy dealer in macabre memorabilia Anthony Marco (Patrick Wymark) who brings to Cushing's attention the skull of the Marquis de Sade.

The skull, it transpires, has a distinctly chequered post-mortem past and had been the property of Sir Matthew who, finally released from its malign influence, definitely doesn't want it back and warns Maitland away from it but unfortunately it's already got its teeth into him and events soon spiral out of control.

With a screenplay initially written by Amicus head Milton Subotsky from an original story by 'Psycho' author Robert Bloch the film was directed (and rewritten) by the legendary Freddie Francis the director of a plethora of Hammer and Amicus delights and the bonkers genius that is 'Mumsy, Nanny, Sonny & Girly' as well as being cinematographer on 'The Innocents' and David Lynch's cinematographer of choice on 'The Elephant Man', 'Dune' and 'Straight Story'.  'The Skull' is as stunning looking as you'd expect from a man with Francis' pedigree although it has to be said the occasional skulls eye view is a bit naff but the hallucinatory Kafka-esque courtroom scene will tell you exactly why Lynch chose to work with Francis.

Cushing and Lee (who, it transpires, cheats horribly at snooker) are both on fine form and Wymark is gloriously creepy.  It's by no means an action packed movie and indeed is a slow build carried along by the strength of the cast and that it looks so damn pretty.

or watch it below.

If you enjoy what we do here on Wyrd Britain and would like to help us continue then we would very much welcome a donation towards keeping the blog going - paypal.me/wyrdbritain
Affiliate links are provided for your convenience and to help mitigate running costs.
Posted by ian holloway at 12:28