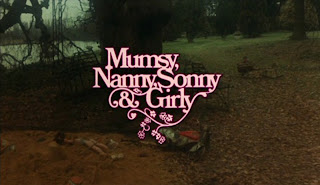 Every now and again a film or a TV show turns up and you wonder how on Earth you've managed to have never even heard of it let alone watched it even though it's got the most eye catching of titles.  Last week when I was writing the blog for 'The Blood Beast Terror' I spotted this curious looking little gem listed on Vanessa Howard's wiki page.  Now, when I see a title like that I've just got to know more which is a habit that's led me down some curious rabbit holes and this is definitely a curious rabbit hole. 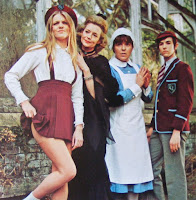 Mumsy (Ursula Howells - Dr Terror's House of Horror, Torture Garden), Nanny (Pat Heywood - 10 Rillington Place), Sonny (Howard Trevor) and Girly (Vanessa Howard) are a happy - if slightly bonkers and a little bit murdery - family living in a large old house where they play 'the game' which involves Sonny and Girly going out into the wider world and luring men back to the house so they can play too or be 'sent to the angels'.  When they choose a male prostitute (Michael Bryant - The Stone Tape) to be their 'New Friend' they've possibly bitten off more than they realise as he soon starts to play the game to his own advantage. 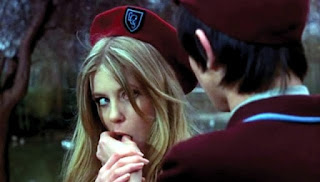 Directed by Freddie Francis, who had made his name as a cinematographer on films such as 'The Innocents' (and later on 'The Elephant Man' and 'Dune') and as a director for Hammer and Amicus studios on films such as 'Dracula Has Risen From the Grave', 'Dr Terror's House of Horror' and Tales From the Crypt' what we have here is a beautiful looking piece of cinema.  A wonderfully odd and unsympathetically bleak comedy made with complete artistic control by a director with an eye for the unusual, the visually striking and the beautiful all of which would explain his later working relationship with David Lynch. 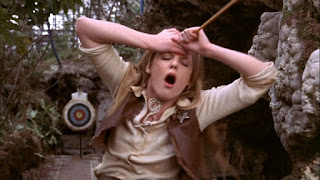 With a script based on a play - 'Happy Family' by Maisie Mosco - it is, at times, a faintly static and talky affair - at one point while watching it my partner who was sat across the room asked me if I was watching a play - and the strong cast have all dialled their performances up to the max but this is Howard's movie and she skips, pouts, gurns, giggles, sings, shrieks, flutters and flounces about the screen, dominating it by playing Girly as a lost child, a coquettish nymphet and as the deranged psychopath she obviously is.

If you enjoy what we do here on Wyrd Britain and would like to help us continue then we would very much welcome a donation towards keeping the blog going - paypal.me/wyrdbritain
Posted by ian holloway at 12:08