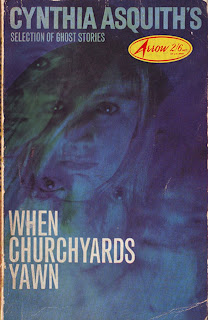 Originally published in 1931 I stumbled across this 1963 reprint in a small, scruffy animal charity shop recently. I obviously recognised the name gracing the cover from her other books that I have here and a glance inside showed a line-up as tantalising as it is obscure.

As I've mentioned before these anthologies often overlap.  There are authors that appear regularly and this one has several in the shapes of Algernon Blackwood, Hugh Walpole, Elizabeth Bowen & L.P. Hartley and certain stories which seem to constitute a 'greatest hits' of the supernatural.  Well, refreshingly none of those are present here and indeed there was only two stories that I'd read before and neither of them to excess.

The book begins with Elizabeth Bowen's 'The Apple Tree', a story of grief and remorse made manifest in the form of the titular tree.  It's a moving piece but one that suffers at it's conclusion for an attempt at an enigmatic ending.  Such is not the case with Hugh Walpole's ' A Little Ghost' which is the story here I'm most familiar with and one I like very much indeed as two lonely souls find solace in each others company.

There are a group of stories within the book that feel like they most express the books original publication date and L.P. Hartley's 'The Cotillon' is one of them.  It tells of the belle of the ball and of the man she has, potentially, wronged.  It's witty and charming in an Agatha Christie sort of way and just as macabrely bloodthirsty.

It's followed by the other story that I've previously read, Ann Bridge's 'The Buick Saloon'. With it's story of colonial heat and repressed emotions freed amongst the expats of Peking it's an odd little tale of curiosity and the thrill of the unknown that nevertheless stays much too much in the mundane for my tastes.

Never one for the mundane, globetrotter, author par excellence and bearer of the perfect ghost story author name, Algernon Blackwood provides us with 'A Threefold Cord...' where a bachelor, bewitched by a woman glimpsed at a party in his childhood home becomes drawn into events far beyond his control and fortunately discovers that friendship is more powerful than family.

And so we arrive at the reason this book kept sitting so restlessly on the shelf and demanding it's turn in the sun, the chance to read an Arthur Machen story that I hadn't already (there are many I'm pleased to say).  'Opening the Door' is a story with it's feet in his journalistic career that relates the disappearance and reappearance of an elderly, bookish clergyman.  It's a glorious read.  Restrained and mysterious and, as often seems the case with Machen, alive with the promise or perhaps menace of unseen worlds parallel to ours into which one can step as easily as opening a door but which perhaps aren't so easy to leave again.

Shane Leslie's 'As In A Glass Dimly' is a bit of a non entity sharing with Machen's piece a journalistic conceit it is a poor mimic that can only emulate the merest hint of the unease and imagination of its predecessor. W.S. Morrison's 'The Horns of the Bull' with it's folktale trappings feels particularly out of place and William Gerhardi's 'The Man Who Came Back' is a short, witty but essentially see-through read.

We're on sentimental ground for the next story, 'The Unbolted Door' by Mrs Belloc Lowndes which shares with it's successor - Oliver Onions' 'John Gladwin Say...', a theme  of loss and grief that has permeated a family in the first instance and a place in the case of the second, although any sense of melancholy is immediately shattered by the cacophony made by 'Out Feathered Friends' in Philip MacDonald's tale.

The book ends with it's longest story by Asquith herself - editors privilege.  'God Grant That She Lye Stille' is the story of a country doctor, his beautiful patient and her malevolent ancestor.  It's an engrossing read that made me desperately need to shout instructions at the ineffective (understandably but frustratingly so) Doctor as his patient slowly slips through his fingers.

I am so very pleased to have found this book.  I very much like these ghostly anthologies but every know and again one appears which just stands out as having been assembled with real care and insight and this is definitely the case here and any effort to track a copy down would be greatly rewarded in the reading.

If you enjoy what we do here on Wyrd Britain and would like to help us continue then we would very much welcome a donation towards keeping the blog going - paypal.me/wyrdbritain
Posted by ian holloway at 22:03