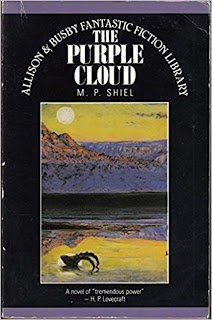 "If now a swell from the Deep has swept over this planetary ship of earth, and I, who alone chanced to find myself in the furthest stern, as the sole survivor of her crew . . . What then, my God, shall I do?" The Purple Cloud is widely hailed as a masterpiece of science fiction and one of the best "last man" novels ever written. A deadly purple vapor passes over the world and annihilates all living creatures except one man, Adam Jeffson. He embarks on an epic journey across a silent and devastated planet, an apocalyptic Robinson Crusoe putting together the semblance of a normal life from the flotsam and jetsam of his former existence. As he descends into madness over the years, he becomes increasingly aware that his survival was no accident and that his destiny—and the fate of the human race—are part of a profound, cosmological plan.

So, you wait ages for one Shiel novel and then two come along at once.  I found this copy of his most renowned work about two days after I'd finished 'Prince Zaleski'.  I don't, as a rule, read two books by the same author very close together but I was hankering after some post-apocalypse shenanigans and this looked as good a shout as any other so in I went.

Adam Jeffson is a cowardly, unlikeable and deeply selfish character who finds himself the sole survivor of the first expedition to the North Pole and then subsequently the last survivor on a planet devastated by a murderous purple gas that has swept the world.

Convinced that he is the final pawn in the battle between the 'White' and the 'Black' Jeffson decides to facilitate a final victory by blowing up the remains of the world's cities.  So, for 17 years he travels the world doing just that pausing only to build his house of wine and gold until an unexpected discovery changes everything.

Shiel's writing her is every bit as flowery and grandiose as in the other book.  He's a fairly slow read taking his time to explore, explain and extrapolate every detail or circumstance.  There's also a deeply religious aspect to the work that never seemed fully developed.  The biggest problem though is how deeply unlikeable Jeffson is.  At no point after the first few pages did I feel anything but repulsion by either him or his actions did have me rooting for the cloud.

I'm glad I finally got to read this but I wasn't sorry when I got to the end.

If you enjoy what we do here on Wyrd Britain and would like to help us continue then we would very much welcome a donation towards keeping the blog going - paypal.me/wyrdbritain
Posted by ian holloway at 12:56