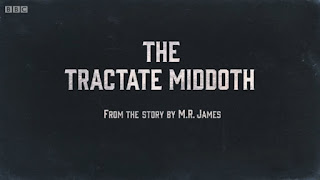 With it's long history of producing M.R. James stories for it's 'A Ghost Story for Christmas' and with horror aficionado Mark Gatiss on the payroll it seems strange that it took the BBC so long to pair the two together but for Christmas Day 2013 they did just that.

The Tractate Middoth is the story of the search for a missing will, disguised and hidden inside a Jewish text, that will deprive villainous John Eldred (John Castle) of a misappropriated inheritance and instead allow it to pass to it's rightful recipient Mary Simpson (played by Wyrd Britain legend Louise Jameson) and her daughter.  Into this is thrown a young librarian, William Garrett (Sacha Dhawan), whose encounter with a terrifying, cobwebby spectre leads him to committing himself to the ladies' cause. 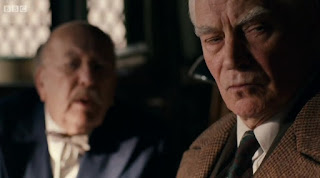 The Tractate Middoth is certainly one of James' more slight tales and as such Gatiss, sitting for the first time in the director' chair, has wisely kept the runtime short.  This does still leave both script and cast a fair amount to fit into 36 minutes but they do so whilst keeping things suitably sedate. The cast are well chosen and produce solid if maybe slightly uninspired performances with Castle's twitchy, restless, haunted Eldred being the standout.  The initial reveal of the spectre is somewhat botched by simply showing too much too soon but later appearances are handled with a far more deft touch.

As a piece it certainly doesn't rival the early adaptations such as 'Lost Hearts' or 'Whistle and I'll Come To You' but as something to while away bit of a quiet and wintery evening it serves it's purpose.

If you enjoy what we do here on Wyrd Britain and would like to help us continue then we would very much welcome a donation towards keeping the blog going - paypal.me/wyrdbritain
Posted by ian holloway at 12:21