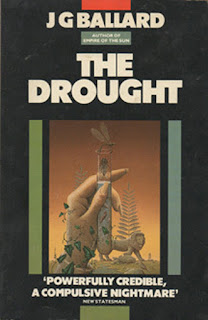 The world is threatened by dramatic climate change in this highly acclaimed and influential novel, one of the most important early works by the bestselling author of 'Cocaine Nights' and 'Super-Cannes'. Water. Man's most precious commodity is a luxury of the past. Radioactive waste from years of industrial dumping has caused the sea to form a protective skin strong enough to devastate the Earth it once sustained. And while the remorseless sun beats down on the dying land, civilisation itself begins to crack. Violence erupts and insanity reigns as the remnants of mankind struggle for survival in a worldwide desert of despair.

I've read one and a bit Ballards before this, a novella called 'Running Wild' and an aborted attempt at an audiobook version of 'The Drowned World' which I didn't take to or rather I didn't take to the reader.  Recently though two events coincided, I finally got round to watching 'High Rise' and then two days later I stumbled across a huge stack of his books in a charity shop.  Of them all this is the one that spoke loudest to me and so I dove straight in.

In contrast to that previous novel here it's lack of water that's the problem as the worlds oceans have, as a result of pollution, acquired a 'skin' which retards rainfall and causes an apocalyptic worldwide drought.  Through this increasingly parched world we follow Dr Charles Ransom as he drifts from his home to the coast and back again.  Along the way we meet various eccentrics all of whom adapt to the increasingly brutal world in their own idiosyncratic ways.  In many ways I was reminded of the oddball Spike Milligan movie 'The Bed Sitting Room' as a cast of larger than life characters pantomime the creations of their new, flawed and doomed societies amidst the salty bones of the old one.

It made for a fascinating read.  I found myself losing track of the characters occasionally and the plot is thin to say the least but this is very much a character piece and watching the cold and detached Ransom retain his self in the face of the violent, the venal and the insane in a brutal new world was compelling.

Buy it here -  The Drought

If you enjoy what we do here on Wyrd Britain and would like to help us continue then we would very much welcome a donation towards keeping the blog going - paypal.me/wyrdbritain
Posted by ian holloway at 11:44