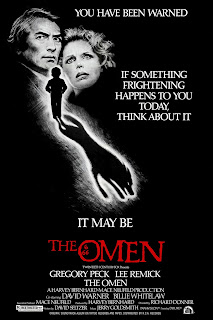 Although a predominantly American made film the Wyrd Britain credentials of The Omen are impeccable with it boasting a mostly UK setting, a cast consisting of some of Britain's finest character actors and a story with the legacy of the Hammer and Amicus studios right at it's core.

Originally released in the UK, on the 6th day of the 6th month in nineteen seventy 6 which almost manages to be spooky whilst simultaneously failing spectacularly, 'The Omen' went on to be one of the biggest grossing films of the year spawning several sequels of decreasing merit and a remake.

The story tells of the birth and childhood of the Antichrist, Damien Thorn, the 'son' of the US ambassador to the UK (Gregory Peck) and his wife (Lee Remick) and the various incidents and accidents that plague them. 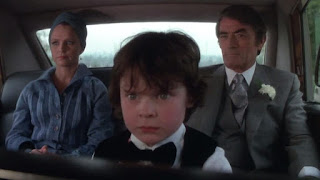 Directed by Richard Donner (who would go on to make Superman two years later) and with a timeless, Academy Award winning score by Jerry Goldsmith (I'm sure most everyone reading this can sing at least a 'do-be, do-be-do' version of  his 'Ave Satani' piece) the movie also features a stunning ensemble of actors including David Warner as doomed photographer Keith Jennings, Patrick Troughton as doomed priest Father Brennan, Leo McKern as the not quite doomed yet but soon archaeologist Carl Bugenhagen, Holly (daughter of Jack) Palance as Damian's doomed nanny and Billie Whitelaw as her evil - and doomed - replacement.

I suspect in many ways 'The Omen' was intended to ride the coat-tails of 'The Exorcist' which, following it's release at the very end of 1973, had gone on to global success and notoriety but the end result is very much a film which has deservedly become a horror classic in it's own right.

If you enjoy what we do here on Wyrd Britain and would like to help us continue then we would very much welcome a donation towards keeping the blog going - paypal.me/wyrdbritain
Posted by ian holloway at 12:26