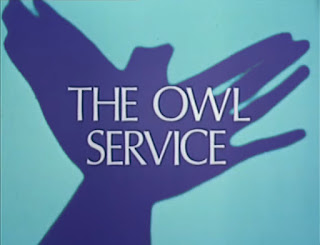 Scripted by Alan Garner from his own novel of two years previous The Owl Service is a 8 part television series originally screened in the UK in late 1969 and early 1970.  It is the story of an eternal love triangle played out again and again throughout history with it's roots in the Welsh myth of Blodeuwedd, a magical woman made of flowers who is turned into an owl for her role in the deaths of two men.

Alison (Gillian Hills), Gwyn (Michael Holden) and Roger (Francis Wallis) are three teenagers thrown together in an isolated Welsh farmhouse when Roger's father Clive (Edwin Richfield) and Alison's mother Margaret (who is never seen) go there for their honeymoon.  The house, formerly owned by Alison's uncle Bertram is home to Gwyn and his housekeeper mother Nancy (Dorothy Edwards) and the eccentric gardener Huw (Raymond Llewellyn). 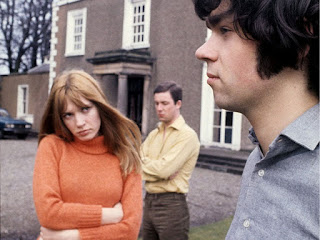 Confined to her bed Alison hears scratching in the attic where she and Gwyn find a set of plates with an unusual pattern that Alison realises can be traced and combined to create an owl.  This is the trigger for a series of events that finds the trio of teens becoming increasingly embroiled in the myth as class and sexual tensions are brought to the surface.

Since it's original screening, and with minimal repeat showings, The Owl Service has deservedly  come to be considered as being amongst the finest pieces of supernatural television. It's beautifully filmed on location in the Welsh countryside around Dinas Mawddwy in North Wales which along with it's use of film and colour makes it a visual feast and the themes it plays with make it an unlikely children's programme and to this day feels more suited to a more mature - even if only YA - audience. 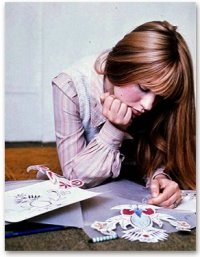 The cast are mixed with both Holden (angry working class Welsh boy) and Wallis (smug middle class English) seemingly out of their depth on several occasions. More successful is Richfield's creepily overattentive Clive, Llewellyn's portrayal of the broken Huw and Hills who at 25 and with a career as a French pop singer (Zou Bisou Bisou) and a memorable role in the previous years 'Blow-Up' behind her was perhaps too old for the part but whose personality dominates the screen.

The pace is glacially slow which allows for the relentless building of tension but at eight episodes feels like it has been stretched to breaking point and I can't help but feel that it's originally intended seven episode run (or possibly even six) would have made for a leaner and more dynamic show.  It is however a unique television experiment that pushed all manner of boundaries for a children's programme in ways that had never been done before and have rarely been done since and which combined the supernatural with the mundane in a subtle and pervasive manner that has very much stood the test of time.

If you enjoy what we do here on Wyrd Britain and would like to help us continue then we would very much welcome a donation towards keeping the blog going - paypal.me/wyrdbritain
Posted by ian holloway at 13:21