The Horse of the Invisible 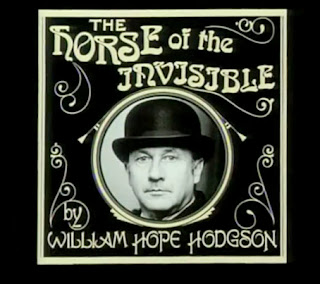 Broadcast in 1971 'The Horse of the Invisible' is so far the only live action adaptation of one of William Hope Hodgson's 'Thomas Carnacki' stories.

Created as an episode of the TV series 'The Rivals of Sherlock Holmes' a series which featured an adaptation of a different Holmes contemporary in each episode such as Guy Boothby's 'Simon Carne' and Emma Orczy's 'Polly Burton'.

In the story Carnacki (played by Donald Pleasence - forever beloved of Wyrd Britain for being the voice of the 'Dark and Lonely Water' public information film) is engaged by Captain Hisgins (Tony Steedman) to save his daughter, Mary (Michele Dotrice, who amassed an impressive Wyrd Britain pedigree in her early career) from the family curse, an invisible horse that begins to terrorise her on the night of her engagement. 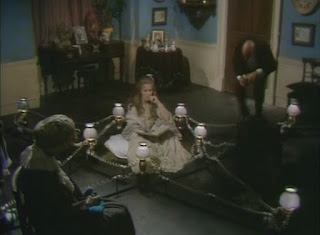 Pleasence is, of course, excellent but personally I've always pictured Carnacki as a younger and more dynamic man so Pleasence's portrayal as a rather sedate, distracted and bookish character took a little getting used to.  The screenplay is faithful to the story and the ending looks every bit as daft in reality as I pictured it when I first read the story but you do get to see Carnacki's trademark electric pentacle in action (kind of).

It is a well-mannered and fairly placid example of early 70s TV that was obviously made on a pretty tight budget but the cast all throw themselves into the story and the end result is entirely enjoyable and makes one wonder why no one else has taken the opportunity to bring Carnacki to the screen.

If you enjoy what we do here on Wyrd Britain and would like to help us continue then we would very much welcome a donation towards keeping the blog going - paypal.me/wyrdbritain
Affiliate links are provided for your convenience and to help mitigate running costs.
Posted by ian holloway at 19:02