Ghosts That Haunt You 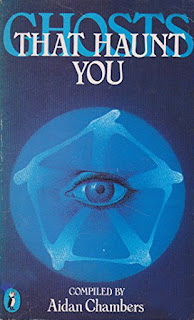 Chambers has amassed an impressive array of talent for this volume with only two names out of the ten being unfamiliar to me.  As it's themed to children you'll be unsurprised that 'Lost Hearts' makes an appearance but the rest of the contents are pleasingly fresh although of varying degrees of success.

The book gets off to a poor start with August Derleth's 'The Lonesome Place'.  A nice idea told well at first that loses it's way terribly and ends with a thud.  It's followed by 'The Empty Schoolroom' by Pamela Hansford Johnson whose tale of bullying and loneliness at a French boarding school is readable but ultimately too hackneyed to be entirely satisfying.

R. Chetwynd-Hayes' 'Brownie' is the story of an encounter between two precocious boys and a rather dim ghostly monk.   Again, enjoyable enough as a story of childish mischief and the triumph of common sense and compassion but with no real substance it's a little forgettable.

Jumping over the aforementioned M.R. James classic we arrive for 'Tea at Ravensburgh'.  Now, I'm a huge fan of Joan Aiken's 'Armitage Family' stories but the light hearted whimsy feels out of place here particularly as it follows in the footsteps of 'Lost Hearts'.

The gloriously named Manly Wade Wellman gives us access to the 'School for the Unspeakable' in a tale of devil worship and revenge before Ray Bradbury's 'The Emissary' is sent out into the world again.  It's a story that crops up in these things fairly often and whilst not being one of his best it's very much at home here.

'The Lamp' by Agatha Christie treads similar ground to Algernon Blackwood's 'The Attic' (which I reviewed here) and is kind of lovely which is more than can be said for the unrelenting grimness of Brian Morse's 'We'll Always Have Tommy'.  It confronts us with two grieving parents and what could be madness, ghost or child in an interesting but slightly too jumbled tale to fully satisfy.

The book ends with a piece by the editor called 'Dead Trouble' which isn't anywhere near as funny as it thinks it is as it tells of a ghosts attempts to let his family know where his body is.

I've read more than a few of these kid themed ghost anthologies over the last few years and this one is on a par with most of them giving an interesting if not entirely wonderful selection.
Posted by ian holloway at 17:14