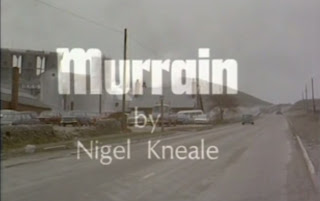 Screened in 1975 as an episode of the, for the most part forgotten, ITV series 'Against the Crowd' and written by Wyrd Britain legend Nigel Kneale, 'Murrain' (an old term meaning a disease affecting animals) is a TV play exploring that most Kneale of topics the clash of science and the supernatural, the modern and the archaic, the logical and superstitious. 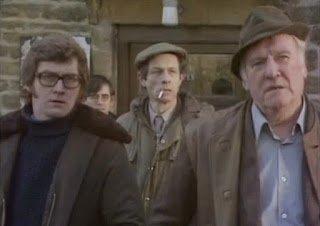 The story tells of a visit by veterinarian Alan Crich (David Simeon) to a tiny, rural village to investigate a mystery illness affecting the pigs belong to Mr. Beeley (played by James Bond's boss, Bernard Lee).  The poorly pigs aren't the only problem in the village with drought, and sickness amongst the villagers adding to their woes.  Spurning the scientific minded approach of the outsider vet the villagers have already decided on the cause of the murrain, local odd bod and suspected witch, Mrs. Clemson (Una Brandon-Jones). 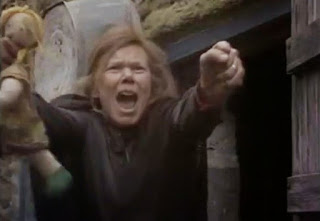 For a show with a runtime of less than an hour it maintains a fairly leisurely pace filled with extended silences as Beeley's bumpkin workforce slowly process even the simplest of tasks and questions. The lack of soundtrack is an unexpected joy that allows ambient sounds to add to the growing air of bucolic menace.  The cast all give a fairly strong account of themselves with Brandon-Jones' lonely, persecuted and unhinged Mrs Clemson being the standout performance and the very downbeat ending leaves a satisfying ambiguity.

In discussions of Kneales' work 'Murrain', if mentioned at all, is often relegated to a footnote, eclipsed by it's more exuberant siblings like 'Quatermass', 'The Stone Tape' or 'Beasts', but sometimes there's gold in a footnote and I think that's the case here.  'Murrain' with the constraints of it's obviously limited budget makes for a tightly controlled and concentrated exploration of Kneale's interests bereft of the more overt science fiction and horror elements of later work such as 'Baby' and 'The Quatermass Conclusion' and is all the better for it.

If you enjoy what we do here on Wyrd Britain and would like to help us continue then we would very much appreciate a donation towards keeping the blog going - paypal.me/wyrdbritain
Posted by ian holloway at 12:45