A Foot in the Grave 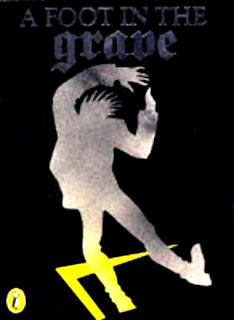 There are a few of these collaborations between Aiken and Pienkowski with this one being the second I've managed to track down.  The first was a collection of Eastern European folk and fairy tales with the art interlaced through and framing the words (my review is here).  This time it's a much more straight forward writer / illustrator relationship with Pienkowski providing a series of paintings and Aiken writing stories to accompany them.

It's an engaging collection with a mix of stories seemingly written for adults alongside ones undoubtedly produced with younger people in mind.  It gives rise to occasionally jarring tonal shifts such as from the creepiness of the 'Movable Eyes' of Zia Tisna's dolls to the comedy of the outraged ghosts and their officious saviour in the books title piece.

These jars are few though and Aiken's storytelling flair and peerless imagination sends us into various places both mundane and unusual that are populated by the charming, the pathetic, the doomed and the damnable such as the screaming ghost infant in 'Beelzebub's Baby', an imaginary land populated by two brothers and an Italian graveyard amongst others.

It's a quick and thoroughly enjoyable read with a light hearted touch that belies the sinister aspect of both the stories and the stark expressionist artwork.

Buy it here -  A Foot in the Grave: and other ghost stories