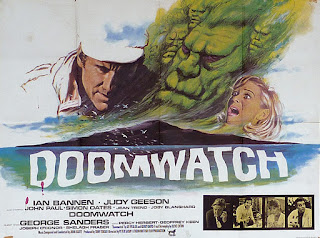 If you were science fiction fan in the very early 1970s then there was a very good chance that you were one of the up to 13.6 million people who tuned in each week to watch 'Doomwatch'. Running for three series on BBC1 between 1970 and 1972 at which point Tigon Films stepped in and made a movie adaptation starring newcomers to the show Ian Bannen and Judy Geeson, written by future 'Survivors' scriptwriter Clive Exton and directed by Hammer regular Peter Sasdy (Taste the Blood of Dracula, Countess Dracula) who would also direct Nigel Kneale's 'The Stone Tape' that same year.

Created by the writing partnership of Gerry Davis and Dr Kit Pedler who had first teamed up on Doctor Who where the former was story editor and the latter the show's scientific advisor for which they created the iconic Cybermen who closed out the tenure of William Hartnell as the First Doctor in 'The Tenth Planet'. 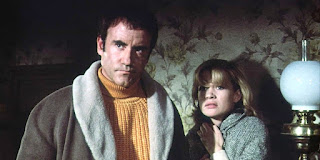 The Doomwatch group or the 'Department for the Observation and Measurement of Scientific Work' as they wisely avoided calling it was an agency tasked with investigating the excesses of science often in stories with a distinctly environmental slant. The movie continues that tradition as Dr. Del Shaw (Bennen) is sent to investigate the effects of an oil spill off the island of Balfe but once there he disovers a conspiracy to cover up a much more profound problem.

The movie is essentially a standalone feature and despite being made and released after the show had ceased broadcasting is a great introduction to a series whose themes have only increased in relevance over the years and is surely due a reappraisal if not a remake (other than the one made and then seemingly forgotten by Channel 5 in the late 90s).

If you enjoy what we do here on Wyrd Britain and would like to help us continue then we would very much welcome a donation towards keeping the blog going - paypal.me/wyrdbritain
Posted by ian holloway at 09:50