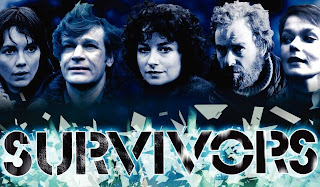 In 1975 Terry Nation, already renowned as the creator of the Daleks and soon to add Blake's 7 to his resume, destroyed the world - it's something every British sci-fi writer does at some point.

In Nation's case he did this via the BBC and a plague known rather wonderfully as 'The Death'.  The show was called 'Survivors' and followed a group of people trying to make their way in a world changed beyond all recognition and the trials they face as they go about relearning the skills needed in order to, well, survive. 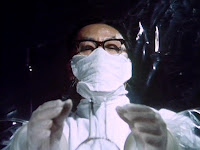 From the off Survivors was always, to an extent, an ensemble piece although one with a changing triumvirate at it's head with only Lucy Fleming's Jenny Richards remaining as a lead for all three series.

Survivors first series concentrates on Jenny, middle class mum in search of her son Abby Grant (Carolyn Seymour) and engineer Greg Preston (Ian McCulloch) as the three slowly find each other and more in a world suddenly bereft of people.  Of the three only the overbearing Greg seems to have the slightest idea about how to survive with Abby entirely fixated on her search for her son and the as wet as water Jenny left entirely at odds with the world.

The life the group build in a handy mansion  is beset by problems from both outside influences and of their own making with one particularly harrowing episode - 'Law and Order' - where Greg shows just how unsuitable he is to have any sort of power.

By the time we arrive at series two our group has, by necessity, joined forces with one we had met briefly in the earlier series.  Abby has left to continue her search for her elusive son and has been replaced by Denis Lill as Charles Vaughan.  Cowed by the deaths of many of the group he led in series one Charles is a more sympathetic character than the single minded and driven Abby.  Joining them in this new community is Charles' saintly partner Pet (Lorna Lewis) and the lazy, smelly, miserable and deeply unpleasant farm hand Hubert Goss (John Abineri). 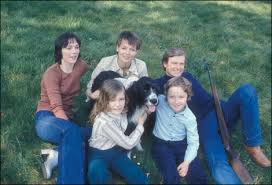 This second series is a more domestic affair as the group meet various other groups and struggle with establishing their crops and livestock. Interpersonal strife is still the hallmark of the series - mostly with Hubert as the catalyst - but the series isn't afraid to cast it's nets wider with the highlight of the series being the two part 'Lights of London' storyline that gives us a much deeper understanding of how the world has changed with our first look at how the city has coped since the Death.  The series ends with Greg abandoning his wife, son and community in order to fly off and tinker with some technology.

To my mind the third series which sees Jenny, Charles and Hubert hit the road in search of Greg is the least successful of the three.  After the relative inaction of the second it's good to see the cast back on the road but the reason behind it is weak - Jenny's constant, whining, neediness for the husband that has deserted her and their baby son to go adventuring with a young Norwegian girl essentially also pretty much abandons her baby in order to try and track Gregg down - but it does result in some excellent episodes as we and they are exposed to the wider post-Death world.

Since I was a little kid I've had a love for this very British sort of post-apocalypse TV and literature; I just find it irresistible.  It's one of those genres where it's easy to point out flaws, inconsistencies and errors and here it's no exception - the obvious 'Where are all the bodies?' question is easily avoided given the TV restrictions of the time - but Survivors real strength is that for the most part they try and treat the apocalypse in as realistic a way as possible.  The actual survivors are woefully ill equipped to deal with the situation they find themselves in and make some spectacularly bad decisions.  They are temperamental, selfish, gossipy, insecure, angry, unpleasant, helpful, loving and entirely human.