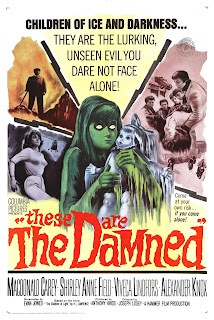 Released in the US as 'These Are The Damned' this is one of Hammer's rare forays into science fiction.  Most widely known for their horrors (50 of the studios 158 movies were in that genre) the studio occasionally veered sideways into sci fi often with very memorable results.  This darkly disturbing tale tells three sets of stories that weave in and out of each other before coming to a brutal and harrowing conclusion.

US tourist Simon (Macdonald Carey) is mugged in a Weymouth back street by a gang of leather clad "teddy boys" led by a very mod looking King (Oliver Reed) before running off on his boat with King's sister Joan (Shirley Anne Field) with the gang hot on their heels.  Meanwhile sculptor Freya Neilson (Viveca Lindfors) has moved into the cliff top home of beauraucrat Bernard (Alexander Knox) who works in the nearby facility and who seems to exert a level of power over various high ranking military officers.  And, locked in a bunker deep in the cliffs are a group of nine very polite but increasingly rebellious and ice cold eleven year old children who Bernard communicates with via closed-circuit TV.

Director Joseph Losey had been - and would be again - a director of art house movies who had studied under Bertolt Brecht and who would go on to create a close working relationship with Harold Pinter and this background in non-mainstream film-making is on display here.  The film is a strange mix of teenage rebellion movie, cold war paranoia and European art-house that make for strange bedfellows.  Very few of the characters have any redeeming features whatsoever and nobody comes out of it well, Bernard because of his utter dedication to his beliefs and his cold detachment towards the cruelty he's inflicting, King's violent nihilism and his incestuous protectiveness towards Joan which has driven her into the arms of the much older, chauvinistic, father figure in the form of Simon simply because he had been nice to her by offering his arm at a crossing and Freya, possibly the only truly moral person here and doomed because of it.

There is, of course, an inherent question within the statement of the title as we have to ask just who are 'the damned' and in a movie that is populated with children, with rebellious "teens" (Reed was 25 at the time) and establishment figures, with artists and intellectuals and with the bourgeoisie and the proletariat coming to an inevitable collision there can surely only be one answer.

Buy it here - The Damned

If you enjoy what we do here on Wyrd Britain and would like to help us continue then we would very much welcome a donation towards keeping the blog going - paypal.me/wyrdbritain
Posted by ian holloway at 11:19

Email ThisBlogThis!Share to TwitterShare to FacebookShare to Pinterest
Labels: Hammer, movie, The Damned