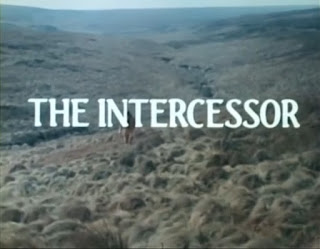 'The Intercessor' was originally written by May Sinclair and published in 1931 in her second collection of supernatural stories called, funnily enough, 'The Intercessor and Other Stories'.  Sinclair is a neglected figure in the history of spooky stories and unjustly so as her stories have a gentleness and a subtlety that is often less pronounced in the work of her contemporaries and core characters that reflect her non literary work as a campaigner for women's and worker's rights.

In 'The Intercessor' a writer, Mr Garvin (John Duttine ('Day of the Triffids)) seeking refuge from the noisy kids in town seeks refuge by relocating to the spare room of the Falshaw's remote farmhouse where he finds a childlike distraction of a very different kind.  As the story progresses he becomes embroiled in a family history rife with betrayal, bitterness and death and resolves to heal the rifts. 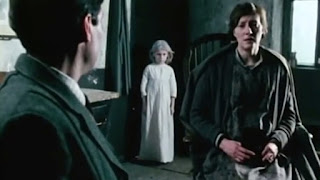 Made for the mid 80s series 'Shades of Darkness', which also included adaptations of stories by Walter de la Mare (watch 'Seaton's Aunt' here), Agatha Christie, Elizabeth Bowen and Edith Wharton, 'The Intercessor' is, almost, as much a family drama as it is a ghost story and in it's limited run time makes the most of both aspects.  The ghostly presence at the heart of the film is refreshingly non-malevolent but the vaguely hallucinatory nature of her appearances is handled fantastically well.

'The Intercessor' is a tale of resentment, loss, madness and redemption filled with great performances from all involved in a very satisfying, coherent and just simply lovely story that, like it's author, deserves to be much better known.
(Please note that the film is only the first 50 minutes of the vid the rest is the episode repeating itself)

If you enjoy what we do here on Wyrd Britain and would like to help us continue then we would very much welcome a donation towards keeping the blog going - paypal.me/wyrdbritain
Affiliate links are provided for your convenience and to help mitigate running costs.
Posted by ian holloway at 11:53

Email ThisBlogThis!Share to TwitterShare to FacebookShare to Pinterest
Labels: ghosts, May Sinclair, Shades of Darkness, The Intercessor, TV Series