Glimpses of the Unknown 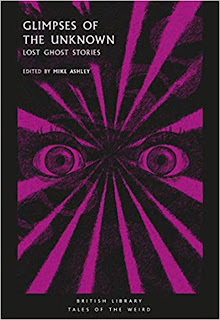 A figure emerges from a painting to pursue a bitter vengeance; the last transmission of a dying man haunts the airwaves, seeking to reveal his murderer; a treasure hunt disturbs an ancient presence in the silence of a lost tomb.
From the vaults of the British Library comes a new anthology celebrating the best works of forgotten, never since republished, supernatural fiction from the early 20th century. Waiting within are malevolent spirits eager to possess the living and mysterious spectral guardians—a diverse host of phantoms exhumed from the rare pages of literary magazines and newspaper serials to thrill once more.

Over the last couple of months the British Library has begun publishing a veritable treasure trove of strange macabre and outre fiction from it's vaults with collections featuring the work of such luminaries as Walter de la Mare and M.R. James alongside less well known writers like Charlotte Riddell.  This particular collection celebrates the forgotten and the unloved as anthologist supreme Mike Ashley here presents eighteen previously unreprinted tales from the golden age of ghostly fiction (1890 - 1920) including a previously lost story by E.F. Benson.  It has to be said upfront that there are no unrecognised classics of the genre here but there are very few stinkers, a couple of pretty nifty ones and a host of readable ones.

The book begins strongly with Hugh E. Wright's 'On The Embankment' an enjoyably creepy, if a tad moralistic, story of a ghostly tramp which is followed by an unusually haunted house in 'Mystery of the Gables' that gives author Elsie Norris what feels like a very modern sensibility.

The welcome strangeness of 'Phantom Death' by pseudonymous Huan Mee is sandwiched by two of the books absolute stinkers before it once again finds it's feet with a poignant tale of obsession and redemption in 'The soul of Maddalina Tonelli' by James Bar one of several authors here I'd like to read more by.

Jack Edwards' 'Haunted' is a nifty piece of weird fiction about a man haunted by an amorphous spectral presence before crime writer Percy James Brebner gives a slightly more traditional ghostly tale with one foot in it's author's preferred genre.

The next two contributions both take a more melancholy path as love proves death is no barrier in Guy Thornes sentimental but lovely 'A Regent of Love Rhymes' and that love sometimes comes too late in 'Amid the Trees' by Francis Xavier.

Neither Mary Schultze's 'The River's Edge' with it's overtly and overly religious tale of a ghostly rescue nor Mary Reynolds' anticlimactic 'A Futile Ghost' provide much of a distraction but Lumley Deakin's 'Ghosts' with it's enigmatic central character 'Cyrus Sabinette' proved to be possibly the gem of the book and I'd love to read more of the rest of the series of stories he wrote featuring the character.

The book's sole US contributor, Elizabeth Jordon, is represented by her story 'Kearney' that tells of an accidental if impetuous shooting that leaves a young military man haunted by his victim whilst Philippa Forest provides a Holmesian tale of murder albeit one with a ghostly heart.

Eric Purves' 'The House of the Black Evil' is an oddly affecting piece of weirdness with a slightly week ending but an interesting premise that for some reason reminded me of Hope Hodgson's 'Carnacki' stories.  Following this is the aforementioned lost E.F.Benson story, 'The Woman in the Veil', it's not great.  What it is is a perfectly functional but slightly tired story of ghostly comeuppance of the type we've already seen in the Brebner story before the book ends with a fantastical adventure tale of ancient dead and elemental forces that feels both an odd fit with the rest of the rest of the book and a strange place to end.

As I mentioned at the beginning of this write up Ashley is a seasoned pro at this anthology curating lark and with the aid of the British Library has compiled a fine collection weighted heavily to the good with only a few unsatisfying or dubious moments.  This is only one book in what appears to be an ongoing series under the umbrella title of 'British Library Tales of the Weird' that looks to be a very fine selection indeed.

Buy it here - Glimpses of the Unknown: Lost Ghost Stories (Tales of the Weird)

If you enjoy what we do here on Wyrd Britain and would like to help us continue then we would very much appreciate a donation towards keeping the blog going - paypal.me/wyrdbritain
Posted by ian holloway at 18:12