Herald of the Hidden 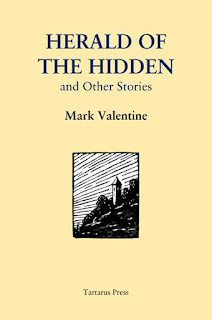 
What is the secret of the house of days? Who are the shadowy figures gathered along an old green road? What is the winged thing seen flitting from an ancient church?


Herald of the Hidden collects ten adventures of the occult detective Ralph Tyler, inspired by William Hope Hodgson’s Carnacki the Ghost-Finder, Algernon Blackwood’s John Silence, and Arthur Machen’s Mr Dyson of The Three Impostors.
But Ralph Tyler is different. He is without private means, or any special esoteric knowledge. Sometimes he doesn’t play fair with his clients or his friend, the narrator. He smokes foul cigarettes, slumps in his chair, and wears a threadbare jacket. And he’s from an obscure shire in the darkest heart of England . . .
Mark Valentine’s Ralph Tyler stories first appeared in hard-to-find small press publications. Three of the stories in this volume are previously unpublished, including two newly written for this collection. Along with six further supernatural tales, all the stories are previously uncollected in book form.

The bulk of this collection consists of Mark's early experiments with the supernatural detective genre.  I'm a huge fan of Mark's other detective tales (written with John Howard) featuring the Connoisseur which are intense, artful and gloriously inventive and I've gone back to them several times over the years.  These earlier stories follow the standard setup of a chronicler and a detective, here called Ralph Tyler, a shambolic everyman who lives in scruffy digs and smokes foul smelling cigarettes.  He's a deliberate shift away from the gentleman adventurer type of sleuth, the man of means that can afford to go off spook hunting such as Algernon Blackwood's 'Dr John Silence', William Hope Hodgson's 'Carnacki' or even Arthur Machen's 'Mr Dyson'.  Tyler works for hire but does so in a way that satisfies his own conscience.

The stories flirt with themes that would come to define Mark's later work with the intrusion of other realms and the hidden histories of the countries of Britain.  The stories here are a little more overt and perhaps muscular than I was expecting but that's perhaps down to youthful verve and whilst many of these stories could be  - crassly - defined as folk horror Mark is - and apparently always was - too good a writer to fall down that particular rabbit hole and his stories embrace a far wider palette of influence than is often the case.

As can probably be inferred from his repeated appearances in these pages I adore Mark's writing.  He draws from a heritage of writers that I find fascinating and marries it with a lively imagination, a curious nature and a writing style that embraces both the then and the now to produce stories that feel timeless.

Buy it here - Herald of the Hidden

If you enjoy what we do here on Wyrd Britain and would like to help us continue then we would very much appreciate a donation towards keeping the blog going - paypal.me/wyrdbritain
Posted by ian holloway at 19:39