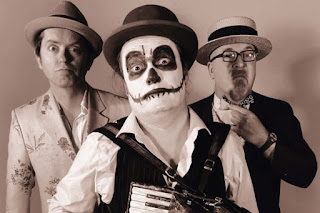 There's a great lineage of musical eccentrics littered across the history of British music and I'm going to try my best to bring as many of them to your attention as I can and so today, in the spirit of that endeavour, I'm going to tell you about one of my favourites, The Tiger Lillies.

Formed in London in 1989 by singer / accordionist Martyn Jacques and joined by drummer Adrian Huge (currently on sabbatical) and bassist Adrian Stout, The Tiger Lillies have built themselves a lush and evocative freakshow cabaret populated by the lost, the broken, the doomed and the desolate.  Theirs is a world of bawdy balladeering and beautiful and poignant tales of the most human and heartwrenching of tragedies all filtered through through the blackest of comedy. 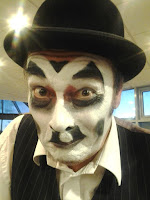 In a career spanning the best part of three decades the band have been nominated for a number of prestigious awards including a Grammy nomination for best classical crossover album and numerous Oliviers (two of which they won), created and participated in numerous theatrical productions and movies, soundtracked adverts (most recently for Cravendale milk) and have amassed a devoted fanbase that includes some very well known names...

All these bands are my favourites, but here is a favourite, favourite. Ladies and Gentlemen, The Tiger Lillies - Matt Groening introduction at ATP Minehead, UK May 05, 2010

Just brilliant and utterly fantastic!! You'll never hear more perverse and twisted as well as haunting and sorrowful songs. Just get a ticket by hook or by crook, if there's any left (which I doubt) and catch them while you can. - Marc Almond

The Tiger Lillies discography is a substantial and bewildering affair for the neophyte so I thought I'd take this opportunity to point you in the direction of some favourites.  Be warned though some of these are not for the easily offended.

) was handed to me by a friend with the words 'You're going to love this'.

The album features what has become the bands signature tune...

Humour has always been at the heart of the band's work as you can see above particularly when allied to a good eyebrow raising shock factor...

), the moral tales of 'Shockheaded Peter' (Buy it here

) and my personal favourite, their sumptuous take on Coleridge's 'The Rime of the Ancient Mariner' (Buy it now


As is often the case with musical outsiders this is music that will both attract and repel and probably not in equal measures either.  It is however music that rewards effort and I urge you to take this opportunity to immerse yourself in the unique world of this amazing band.
Posted by ian holloway at 12:22

Email ThisBlogThis!Share to TwitterShare to FacebookShare to Pinterest
Labels: dark cabaret, music, The Rime of the Ancient Mariner, The Tiger Lillies