Ancient Sorceries and other stories 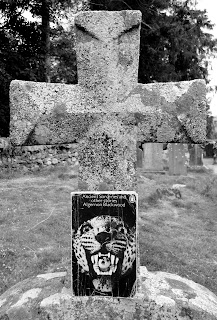 I'm still fairly new to these books of Victorian & Edwardian ghostly / horror / weird fiction that I've been reading on and off over the last year so many of the writers that are considered key to the genres - let alone the more obscure - are still unknown quantities for me.

I've always had a soft spot for the film and TV versions but horror books never were a thing for me (except for a short lived teenage binge on Shaun Hutson books).  So now that I'm giving them a go there are a few names at the top of my hit lists that I've been slowly ticking off;  Blackwood is one of them.

I was pleased to unearth a copy of this in a local charity shop in time to take on holiday to Ireland with me.  I sat and read it in a park in Dublin, a derelict graveyard in Glendalough (see photo), the castle grounds in Kilkenny and it was in my back pocket when I fell down a flight of stairs in Mullingar and broke my leg, arm and rib which kinda put a hold on reading, as did the ensuing operation and couple of months of morphine and frustrating, fidgety recuperation.  But now, two months on from starting it, I've finished the final story.

The book contains 4 short stories, 2 longer ones and each offers up an individual slice of the odd and the creepy.

Opening proceedings is 'The Empty House' wherein a young man accompanies a curious elder aunt on her ill-conceived nocturnal exploration of the local creepy pile.  He then trumps the whole haunted house idea with an entire haunted island that finds a student terrified by two native Americans on a deserted island.

The third story is my only previous experience of Blackwood, a great little story where a student entertains a visitor from his past in 'Keeping His Promise'.

My favourite story here is up next, 'A Case of Eavedropping' tells of a guest house haunted by echoes of an old crime.

The two remaining stories that make up the back half of the book both feature Blackwood's paranormal investigator Dr. John Silence.  In the first of the pair, 'Ancient Sorceries', he really is little more than the narrator of a tale of love and cats whereas the second has him centre stage investigating strange fiery occurrences at the country residence of a retired soldier in 'The Nemesis of Fire'.

In all a thoroughly enjoyable read that has greatly endeared me to Blackwood.  His prose is significantly less dense than many of his contemporaries and so I found him more readily readable and minor detours into the joys of surgery aside this was a very enjoyable read.