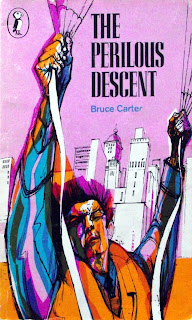 Also published under the titles The Perilous Descent and Perilous Descent into a Strange Lost World. It tells the story of two English airmen shot down off the Dutch coast during the Second World War. They are washed up on a sandbar where they discover an entrance to an underground world.

One from a batch of Puffins and Penguins with groovy cover art that I picked up a few months ago and which have proved themselves very handy since I took a short cut down some stairs.  This one though, a WWII era hollow Earth story, turned out to be pretty bad.

It tells of two British WWII pilots - or 'airpilots' as the blurb calls them - who are shot down during a sortie over Europe and crash land in the channel.  After floating ashore the implausibly named Johnny Wild and Danny Black find themselves falling through a hole in the ground, crawling along endless tunnels and inexplicably parachuting deeper into the Earth before encountering a lost civilisation of English emigrants in their subterranean city of skyscrapers and electric cable cars.

They find that these sword wielding subterraneans are currently enmeshed in a civil war that our plucky heroes promptly end by introducing the locals to aviation which allows the locals to build a fully functioning a jet plane in just three days and then to top it off Black and Wild lead the attack on the rebels and use their pistols to massacre around 70 people purely on the word of a man they'd known for no more than a few days.

They then walk, underground, underneath the bed of the Atlantic Ocean to South America (a distance of some 9000 km) before climbing once more to the surface into the middle of a civil war where they are captured and narrowly avoid being both executed and blown up - there's also reference to them subsequently meeting up with some "very unfriendly head-hunters. We were half-gods and half-captives for two years".

It was absolute piffle but, at only 171 pages it was a mercifully quick read that ticked off another evening of recovery from this damnable broken leg.

I do love that Trevor Stubley cover illustration though.
Posted by ian holloway at 12:03