The Further Adventures of Sherlock Holmes: The War of the Worlds 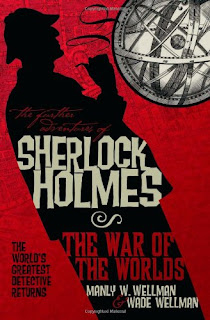 Sir Arthur Conan Doyle’s timeless creation returns in a new series of handsomely designed, long out-of-print detective stories. From the earliest days of Holmes’ career to his astonishing encounters with Martian invaders, the Further Adventures series encapsulates the most varied and thrilling cases of the worlds’ greatest detective.
Sherlock Holmes, Professor Challenger and Dr. Watson meet their match when the streets of London are left decimated by a prolonged alien attack. Who could be responsible for such destruction? Sherlock Holmes is about to find out...
Manly and Wade Wellman’s novel takes H.G. Well’s classic story and throws Holmes into the mix, with surprising and unexpected results.

The story is split into several parts with the perspective shifting throughout giving us tales of daring-do from Holmes, Challenger and then Watson for the last half of the novel at which point he takes over relating the tale.

It was solidly written and an enjoyable enough read. The characterisation of Holmes was way off portraying him as a friendly genius rather than the abrupt, rude and rather arrogant Holmes we know and love. He is however bursting with observations, intimations and deductions, as he should be. Challenger is the foil to this though as his egotism is so extraordinarily rampant that perhaps Holmes needed to be defanged. No point in defanging Challenger I suppose as readers are more likely to have Holmes as a reference point when venturing into these pages than the more obscure professor. Watson is very much in his bumbling persona here which is a shame as I always thought there was more to Watson than was often made of him in the non-canon or movie representations.

The one aspect of the book that I truly disliked though was the romance between Holmes and Mrs Hudson. I thought it was a nonsensical idea that only served to pad a thinly thought out plotline. Other than that a fun afternoon's read.
Posted by ian holloway at 16:55