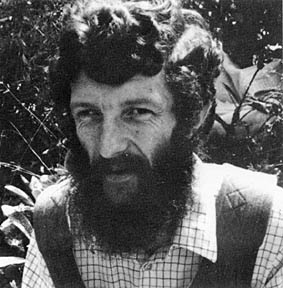 At the very end of the 1970s and into the early years of the 80s a book called 'Masquerade' created by an artist named Kit Williams inspired a minor furore in the UK that resulted in people digging up chunks of the English countryside looking for a Golden Hare that the author had made and buried somewhere.  Hidden within the book were clues as to the location of this buried treasure and the book became a smash and the ensuing scavenger hunt was big news for a short while.

The book itself is a series of 15 of Williams' paintings that tells the story of a hare who loses the gift he's transporting from the moon to the sun which becomes the object of the hunt. 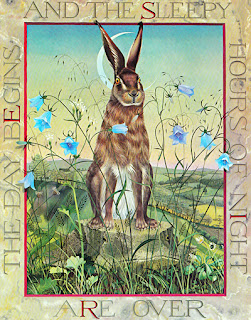 The finding of the hare has become mired in controversy - see here - and the actual solution to the puzzle was spectacularly convoluted.  Below is an extract from the Wikipedia page (that the above link takes you to) because I'm not even going to try and explain it... 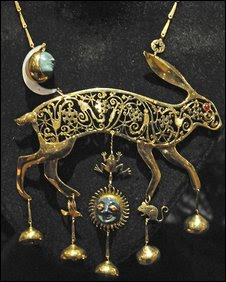 Taking the first letter indicated by each painting, the acrostic “CLOSE BY AMPTHILL” is revealed. Properly interpreted, the message told one to dig near the cross-shaped monument to Catherine of Aragon in Ampthill Park, at the precise spot touched by the tip of the monument’s shadow at the stroke of noon on the date of either the vernal or autumnal equinox.
Many additional hints and "confirmers" are scattered throughout the book. For example, in the painting depicting the Sun and the Moon dancing around the Earth, the hands of the two figures are clasped together, pointing at the date of the spring equinox.

Hope that didn't make your head hurt too much.

Williams' experience of the Masquerade phenomena caused him to distance himself from the public eye but he continues to produce work including a number of major pieces of public art including Cheltenham's 'Wishing Fish Clock' and the Dragonfly maze in Bourton-on-the-Water both situated in the county where he maintains his studio.

He remains a fascinating and unique artist utterly and triumphantly out of step with modern art trends who has spent his life creating a body of work that reflects himself and the world as he sees / wishes it.