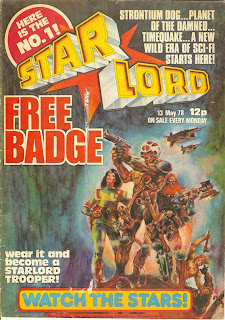 When I were a wee lad of 8 I was allowed, for the first time, to get a comic on order.  I'd been a perennial browser before then, picking up random issues of a variety of things like the war comics Warlord and Victor or the reprints of American superhero stuff such as Rampage.

Now though, very excitingly, I could pick one of my own to get every issue of.  Naturally I chose the one that was the newest on the spinner, Starlord.

Conceived as a sister comic for 2000AD, Starlord was more expensive, was on better paper with crisper printing and had longer stories.  And oh the stories; the mutant bounty hunter Johnny Alpha in 'Strontium Dog', 'Planet of the Damned' about a passenger plane crashed on a hostile world inside the Bermuda Triangle, 'Ro-Busters' which brought the world Hammerstein and Ro-Jaws (a pun I quite literally only finally got about 2 years ago - I'm not proud of myself) and "Big Jobs!", the psychic teenagers of 'Mind Wars' and the time travellers in 'Timequake'.  In addition to these there were 2000AD 'Future Shock' style shorts such as 'Earn Big Money While You Sleep' and 'Good Morning, Sheldon, I Love You'. 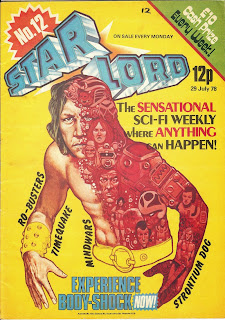 I loved my comic, 'Strontium Dog' and 'Planet of the Dammed' in particular.

It only lasted for 22 issues (and a couple of annuals) before the higher production costs forced it's merger with the cheaper to produce 2000AD which it was actually outselling.  I didn't really mind I just moved my allegiance over to that other comic and carried on reading.

Several of those old strips - 'Strontium Dog' & 'Ro-Busters' - have since been released in telephone directory sized collections which are well worth picking up but recently I had a hankering for 'Planet of the Damned'.  I could remember the general gist and a few of the plot points but I was curious for more.  A quick search brought me too the website below.  A set of complete scans of each of the 22 issues (but not the annuals) waiting to be read.  It's best viewed on a tablet if you have one but whichever way you read it please do so.  It's great fun.

Starlord: The (not quite) Complete Scans.

Also, if you'd like a considerably more detailed look at the comic than my nostalgic witterings then please check this site...

A Brief Histroy of Starlord.
Posted by ian holloway at 21:04