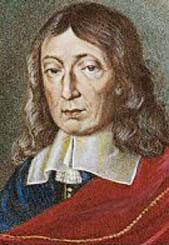 For much of his adult life Milton was a polemicist and civil servant (Secretary for Foreign Tongues) working for the revolutionary government of Oliver Cromwell.  After the reformation, in his early 50s, poor and completely blind Milton realised his lifetime ambition to 'write' (he actually dictated it to a number of assistants) an epic poem; Paradise Lost.  It is a stunning achievement that tells of Satan's rebellion against Heaven and the subsequent fall of man and the banishment of Adam and Eve from the Garden of Eden.

Copies of the book are easy to come by but a decent reading of it on YouTube less so.  In it's place here is a short documentary on Milton's life and work presented by John Gielgud with readings by Ian Richardson.