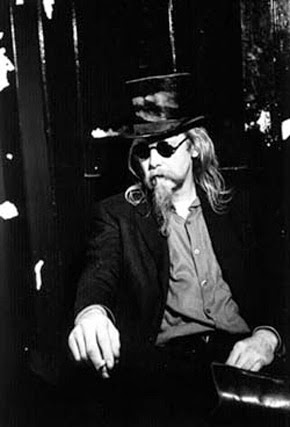 The story goes that in 1978 a Krautrock / Musique concrète obsessed signwriter named Stephen Stapleton was allowed some free studio time at a studio he'd been doing some work for.  Roping in a couple of friends they recorded the first Nurse With Wound album 'Chance Meeting on a Dissecting Table of a Sewing Machine and an Umbrella' in around 6 hours. The album is a kaleidoscopic mix of improvisation, noise, industrial scrapings, synth swoops, abstract guitar, concrete elements and a healthy dada sensibility and offered to the world an uncompromising glimpse of things to come.

It wasn't however until NWW became a Stapleton solo project that the project really took shape.  Over the course of some 60 odd albums Stapleton has shaped NWW into a musical entity unlike any other.

Over the years Stapleton has molded NWW into a frankly bewildering variety of shapes.  From the nightmare soundscapes of 1982s 'Homotopy to Marie'.

Through the Dada playfulness of 'The Ladies Home Tickler'.

To the stark, droning, post-industrial beauty of 'Soliloquy for Lilith'

and 'Salt Marie Celeste'. (here in it's starker earlier version as 'Salt')

The beautifully cut-up word play of 'Echo Poeme Sequence No. 2'

and the Neu (ish) excursions into motorik Krautrock with Stereolab.

Stapleton's has been a musical adventure forged along entirely personal lines.  There have been many collaborators along the way who have been embraced under the Nurse With Wound banner - David Tibet, Colin Potter, Andrew Liles, Matt Waldron, Tony Wakeford, Jim Thirwell and more - but it is and always will be Stapleton's project to shape as his muse dictates and we wouldn't have it any other way.

To finish here is a small documentary shot a few years ago by Jon Whitney of the Brainwashed website visiting Stephen Stapleton on his farm in Ireland.