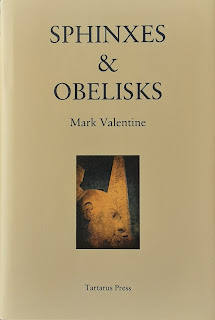 Mark Valentine
Tartarus Press
Why did Queen Victoria demand to see the disembodied head of a talking sphinx? Why will you never find the fabulous art deco book In That Look the Unicorn Stood? What was the slight flaw in the idea of racing cheetahs at the White City? What was the date confidently given for apocalypse at a Somerset railway station book-stall? Who had visions of Atlantis in an old house in Nightingale Lane?
These and many other enigmas are discussed in this new book of essays from Mark Valentine. As in his previous well-received collections, you will also be offered suggestions for recondite reading in overlooked books that ought to be better known: an interplanetary fantasy by a Welsh squire; a timeslip into a mysterious England by a priest once called the original of Dorian Gray; an avant-garde novel about a tea-party and the Holy Grail.
This is the third collection of Mark's explorations of forgotten and underappreciated authors alongside some of his other diversions such as music, pub signs and tarot.  Like the previous books - 'A Country Still All Mystery' & 'A Wild Tumultory Library' - it's a fascinating delight of a read that will send you scurrying to the nearest dusty bookshop.
In these pages Mark discusses a bewildering assortment of intriguing books by authors of the early 20th century and late 19th such as Gerald Warre Cornish, H.M. Vaughan, Riccardo Stephens and E. Temple Thurston amongst many others - the last two being some of the very few folks here that I had already been aware of and that's only because Mark had kindly gifted me copies of their books last year.
As I've said before and will certainly say again Mr. Valentine is one of the finest writers we have at the moment as whether he's writing fiction or non he can transport and beguile like few others and his works are always gems to be savoured.
A few copies remain from the publisher at the link above.
..........................................................................................

If you enjoy what we do here on Wyrd Britain and would like to help us continue then we would very much welcome a donation towards keeping the blog going - paypal.me/wyrdbritain
Affiliate links are provided for your convenience and to help mitigate running costs.
Posted by ian holloway at 14:51