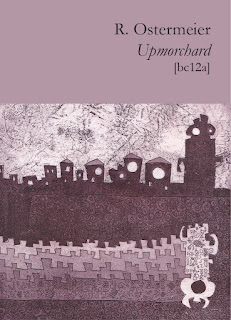 R. Ostermeier
Broodcomb PressUpmorchard revisits the peninsula’s past for the tale of Watts Barlik – Barley – who is drawn to an abandoned fishing hamlet and the stone artefact housed there—
“With prompting, Mrs Lofts told him all about the discovery. Out there in the darkness was what she called a spit island, Gloy Ness. The island’s geography and composition was impermanent. The shingle was endlessly reformed by storms, the tide, littoral drift. Ten years previously a feral storm uncovered a vast area of human-made artefacts. Gloy Ness was roughly five miles long, and it shifted quickly in tough-weather years so whatever the artefacts were, they took them out in case of damage (or loss) had the island reformed over it.
By this time Barley was like a dog with its teeth stuck in a toffee. He leaned towards what he could see of the woman, hoping the dark would rattle more out of her. It did—.”

Last year, on the advice of a friend I took a dive into 'A Trick of the Shadow' the debut collection from 'R. Ostermeier' and a very fine read it turned out to be.  Shades of Arthur Machen and Robert Aickman wandered through the stories and imbued them with a delicious rural strangeness and now with this limited edition hardback novella Broodcomb have provided us with another fabulous excursion into the unknown.

In this new novella we are back on the Peninsula (the location of all of Broodcomb's fictions) in the company of a young academic, Barley, taking a long walking holiday through the countryside.  His travels take him to a steam train which in turn takes him to the location of an enigmatic archeological find.  Weedling his way onto the site he is met by the remains of a giant stone figure and it's custodians, a driven and mentally fragile researcher and his very concerned friend.

The researcher (Arthur) is trying to translate the writing on the stones but has become academically isolated due to his unorthodox methods.  Barley is soon drawn into Arthur's world view and the two of them embark on a bold plan to understand the stones.

There's a Lovecraftian feel here with echoes of the watery Innsmouth stories and also of the Irish myth of the Fomorians - an ancient sea dwelling race that preyed on the early settlers.  Ostermeier teases out the history of the stones and leaves us with a fractured snapshot of a troubled time and of a violent history that perhaps has yet to end.

Affiliate links are provided for your convenience and to help mitigate running costs.
Posted by ian holloway at 11:53