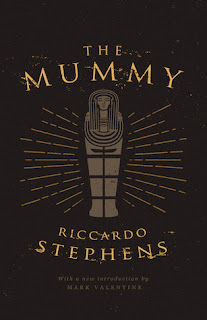 Dr. Armiston, middle-aged bachelor and general practitioner, has his quiet and routine life interrupted when he is called in to consult on the deaths of two young men. One case seems to be a tragic accident, the other the result of natural causes, but they have one strange thing in common: the presence of the same ancient Egyptian mummy case in both men's homes. When Armiston learns that the sarcophagus is inscribed with a terrible curse promising vengeance on anyone who disturbs the mummy's repose, and as the series of deaths continues, the doctor will risk his own life to unravel the mystery and find out whether the mummy - or something or someone else - is responsible.

I've never had much in the way of an interest for Egyptian history or mythology which goes some way to explaining why this was the last of the four Valancourt books I was kindly gifted that I read.

The blurb on the back made it all sound like an intriguing Hammer style romp with a mummy at it's core but the reality proved to be a more intriguing conundrum, a murder mystery with occult and near sci-fi elements.

Dr Armiston, a crotchedy, middle-aged batchelor is drawn into a bet between the members of the Plain Speakers Club that has already resulted in the death of a member with a second to follow soon after.  The deaths all seem connected to the lots drawn to take custody of a supposedly cursed sarcophagus for a fortnight.  Armiston throws himself into the centre of the mystery and the lives of the eclectic group of characters that make up the faction of the Plain Speakers.

Armiston is a fairly unlikeable character being a right misery whilst the character I found most interesting doesn't make it far into the book which was a shame.  As a whodunnit it's fairly easy to spot the 'who' and the 'dunnit' isn't entirely relevant.  It's a pretty slow sort of read that I have to admit I struggled to get into for a while.  By the mid point though I'd found it's rhythm, was enjoying it and was intrigued by how it played out.

Affiliate links are provided for your convenience and to help mitigate running costs.
Posted by ian holloway at 18:58