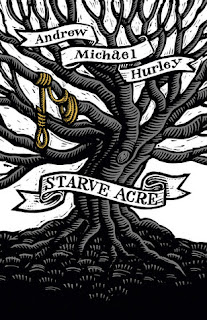 The worst thing possible has happened. Richard and Juliette Willoughby’s son, Ewan, has died suddenly at the age of five. Starve Acre, their house by the moors, was to be full of life, but is now a haunted place.
Juliette, convinced Ewan still lives there in some form, seeks the help of the Beacons, a seemingly benevolent group of occultists. Richard, to try and keep the boy out of his mind, has turned his attention to the field opposite the house, where he patiently digs the barren dirt in search of a legendary oak tree.

I wasn't as taken by Hurley's first novel, 'The Loney' (UK

), as lots of other people seemed to be but I enjoyed his second, 'Devil's Day' (UK

), more than others seemed to and with this, his third, I seem to be falling somewhere between the two. 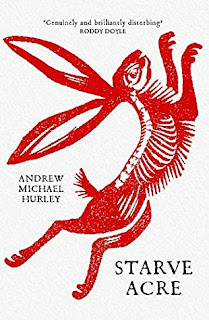 The story of a couple dealing with the sudden death of their troubled young son takes a turn for the weird as the story unfolds.  It's a story that is unremittingly bleak from beginning to end, in fact, increasingly so.

One of the things I didn't like about 'The Loney' was that the - for lack of a better word - 'magic' was so hidden as to be almost an afterthought and as such I thought it felt tacked on whereas in 'Devil's Day' it was beautifully disguised within the story; virtually unnoticed and all the more powerful for it.  In this case it's just too blatant.  The appearance of the hare and Richard's acceptance of such a bizarre occurrence entirely at odds with his reaction to Mrs Forde and the Beacons.

It's a beautifully readable book though. Hurley teases out the story and I found it hard to put the book down, finishing it in two sittings but I have to admit it felt underdeveloped and as such it didn't quite satisfy me to the extent its predecessor did.

Affiliate links are provided for your convenience and to help mitigate running costs.
Posted by ian holloway at 11:56