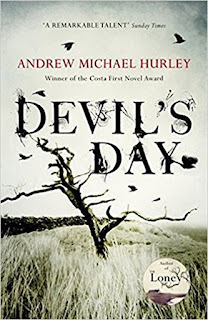 Every autumn, John Pentecost returns to the Lancashire farm where he grew up to help gather the sheep from the moors. Generally, very little changes in the Briardale Valley, but this year things are different. His grandfather - known to everyone as the Gaffer - has died and John's new wife, Katherine, is accompanying him for the first time.
Every year, the Gaffer would redraw the boundary lines of the village, with pen and paper but also through the remembrance of folk tales, family stories and timeless communal rituals which keep the sheep safe from the Devil. This year, though, the determination of some members of the community to defend those boundary lines has strengthened, and John and Katherine must decide where their loyalties lie, and whether they are prepared to make the sacrifices necessary to join the tribe...
Gripping, unsettling and beautifully written, Andrew Michael Hurley's new novel asks how much we owe to tradition, and how far we will go to belong.

So, I didn't particularly dig Hurley's debut novel, 'the Loney'.  It took me two attempts to get through it and when I did I found it a little overblown and a tiny bit Dennis Wheatley.  I was interested enough to give this, his second book, a try though and I'm very glad I did.

Devil's Day is a local tradition commemorating a time - 100ish years ago - when the Devil plagued a small farming community. This year prodigal farmers son John is returning to the farm to help out with the gathering of the sheep and his grandfather's funeral and this time, for the first time, he's brought his new wife Kat because he has a plan to return for good and needs to convince her.

With the Devil's Day celebration at its centre you'd expect a supernatural twist to the novel and you won't be disappointed on that front.  In the first novel the magic element was utterly hidden, it happened behind closed doors and all we saw were hints that dead babies were involved.  Here the supernatural elements were altogether more subtle and only made themselves apparent in brief flashes and were all the better for it.

The story at the heart of the book is one about family - in various permutations - and roots and heritage and in that it is pretty successful.  I'm less impressed with the gangster subplot which struck me as clumsy and without the more outre elements I'm unsure as to whether the book would have held my attention but it did and it and in the final examination it was an enjoyable read.

If you enjoy what we do here on Wyrd Britain and would like to help us continue then we would very much appreciate a donation towards keeping the blog going - paypal.me/wyrdbritain
Posted by ian holloway at 14:29