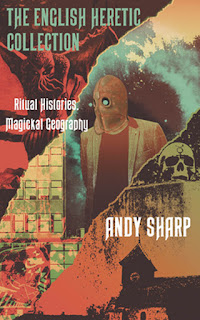 Andy Sharp delivers a visionary field report based on fifteen years of deep vein creative research expeditions to England's strangest landscapes with a host of tragic players.
From its inaugural Black Plaque in honour of Witchfinder General director Michael Reeves, this unique collection follows a veridical trajectory to the frontiers of belief. Reeves' film becomes a conspiratorial cauldron drawing in a host of tragic players in the end game of the Sixties. The Cornwall of Du Maurier's The Birds is ploughed to reveal the hidden psychic codes of our Blitz spirit.
In a powerfully relevant occult rendering of a bruised Island, the myth of Churchill is dissected and re-animalised. New maps of hell are drawn by colliding the forensic vision of JG Ballard and Lovecraftian magic. Actors, witches and psychopaths maraud across a nightmare terrain of murderous henges and abandoned military bases; conflating creative research into a surreal documentary, history as hallucination. Geography becomes an alchemical alembic, a vale of soul-making distilled by the lysergic psychobiology of Stanislav Grof, the alcoholic lyricism of Malcolm Lowry, and the convulsive travelogues of the Marquis de Sade.
If history is revealed as paranoid ritual, how do we escape its time traps to wild new imaginative geographies? The English Heretic collection is a darkly comical, urgently lyrical, mental escape hatch from the hells of our own making.

Andy Sharp's English Heretic was an audio / textual project that over the course of some 15 years engaged in a series of psychogeographical, magickal investigations into the various physical, metphysical and fictional characteristics and characters of that notional vision of Britain that we celebrate on Wyrd Britain.

Sharp's literary conjourings present an exhaustive and occasionally exhausting survey that encompasses everyone and everything from J.G. Ballard to Kenneth Grant via Angel Blake and from Orford Ness to the Manchester Morgue via The House on the Borderland.

It makes for a fascinating read but not a particularly straightforward one.  Andy is exploring the magickal connections between his subjects whereas my inerests in such matters are minimal.  At best it could be said that me and occultism / magick met up in a pub once had a nice chat over a couple of beers and then happily went our separate ways.  I find that there's too much of a stylistic link between psychogeography and conspiracy theories in the rolling logic of their construction albeit with the former relying on an obsessive attention to history and literature whilst the latter just requiring gullibility but it's this link that I often find equally fascinating, frustrating and sometimes, it must be said, a little silly.

Like I said though what Andy has done with English Heretic makes for a captivating read that, even for those with a passing interest in all the various flavours of wyrdness this country has manifested, is well worth your time and money and beyond that if you are a devotee of the more occult flavoured history of the country then it is heartily recommended.


If you enjoy what we do here on Wyrd Britain and would like to help us continue then we would very much welcome a donation towards keeping the blog going - paypal.me/wyrdbritain